Directed by Maia Lekow, Christopher King
A potent and scary parable about the harm spread by those who see the world as an evil and demonic place.

The Letter screened as part of the AFI Docs Film Festival on June 21, 2020. Watch for other screenings and streaming releases on the film's website.

Many indigenous peoples still hold fast to the belief that thought and language have the power to shape reality, control events, and manipulate the lives of others. Examples of these occurrences are exorcisms, prayer muggings, curses, and hexes. Those who advocate such negative practices do so as part of their conviction that the world is a dangerous and demonic place. Equally potent is the view that evil has the upper hand on earth whereas God rules in heaven. 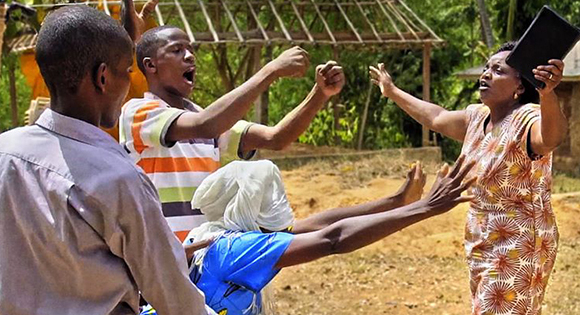 The Letter is a poignant African documentary produced and directed by Maia Lekow and Christopher King that depicts the harmful, dangerous, and catastrophic consequences of curses and other forms of negative practices upon innocent people. It was filmed in a small village in Kenya.

Grandmother is a hard-working 94-year-old elder in the local Christian Pentecostal church who has been accused in a letter of being a witch. Her grandson Karisa arrives from the city in order to find those who have spread these lies. Complicating the situation are disputes in the village over land rights upon the death of an elder. The dramatic conclusion brings together the supporters of Grandmother and those who want to execute her with machetes in the name of good and righteousness.