Directed by David Wnendt
An exquisitely rendered tale of an artist's loneliness and starting over again.

So many creative individuals start out with high expectations and when felled by failures and setbacks, lose hope and give up. Others persevere even in the face of a hundred obstacles. Frances (Jenny Slate) is a twenty-something painter whose Manhattan career has not taken off in the way she and her artistic parents thought it would.

After receiving a dismal evaluation of her most recent creations by three New York curators, Frances is feeling down-in-the-dumps. Then just after her boyfriend leaves her, she learns her younger sister is getting married and her parents are separating. 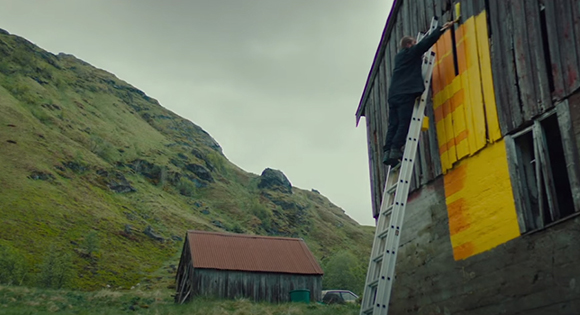 Unwilling to stay in the apartment alone with her highly critical father (David Paymer), Frances takes a painting residency in a remote village in northern Norway for a nightless summer. Her boss is a gruff and demanding artist (Fridtjof Saheim) whose project is painting a decrepit barn sunshine yellow. While he does the outside, she paints strips of wood on the inside and feels like she's following a paint-by-numbers coloring book.

The Sunlit Night is directed by David Wnendt with a screenplay by Rebecca Dinerstein Knight from her novel. When Yasha (Alex Sharp) arrives in Norway from New York to give his father a Viking funeral, we immediately see the connections between him and Frances; both are lonely souls who are seeking purpose and meaning after their previously constructed worlds have fallen apart. 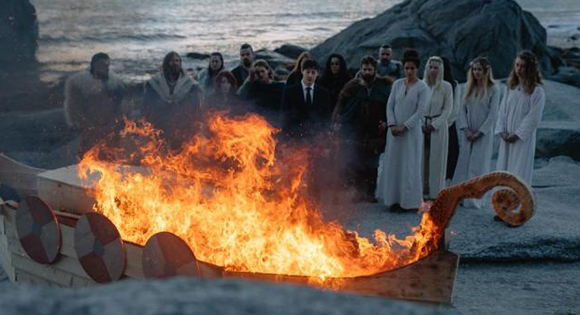 They spend some time together marveling at the unique features of the landscape and light. An American who considers himself an expert on Viking history (Zach Galifianakis) ushers them through the local museum. The two young people draw closer, especially after his stern and authoritarian mother (Gillian Anderson) arrives on the scene. Best of all, during her spare time Frances works on her own painting, inspired by the people and the place to explore new territory in her art.

We were happy with the ending of The Sunlit Night and saw it as a beginning to something new, a chance for Frances to start over with a fresh perspective.