Directed by Hans Petter Moland
An enigmatic meditation on memory.

Based on Norwegian author Per Petterson’s bestselling novel, Out Stealing Horses is a compelling coming-of-age drama that invites deep reflection on familial obligation, regret, grief, and the ties that bind us to pasts we think we’ve long escaped. Directed with calm efficiency by Hans Petter Moland, featuring gorgeous cinematography by Thomas Hardmeier and Rasmus Videbaek, and accompanied by a thrillingly urgent score by Kaspar Kaae, the film often looks, sounds, and feels like a heroic saga, but the story it tells couldn’t be more personal and introspective.

Trond (Stellan Skarsgard), a 67-year-old Swedish widower, has escaped to a remote region of Norway following the death of his wife. The icy winter of 1999 setting immediately conveys his sense of painful isolation. Just before the turn of a new century, after decades of happy marriage in Sweden, Trond has chosen to turn away from life, getting “fittingly drunk” each night and cutting himself off from memories only revealed in fractured flashbacks. 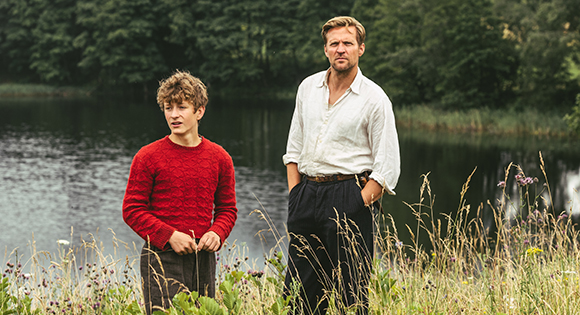 But a chilling car crash with a snowbank and a chance encounter with a quiet neighbor named Lars (Bjorn Floberg) upend Trond’s plans for uninterrupted solitude. Recognizing Lars as someone he knew as a young boy in his childhood, Trond is thrust back into even deeper memories, particularly of golden-hued rural Norway in the 1940s, when Trond spent time with his mysteriously stoic father and grew up in ways unexpected (and even undesired). Even as he grumbles, it’s apparent that Trond hopes a message from the past just might bring some hard-won solace, as it’s clear that his current pain stems from a nagging suspicion that he hasn’t grown into the man he could have been.

From here, the narrative shuttles back and forth between aging Trond’s frozen present and his summery teenaged past. Through every flashback, more details reveal just how Trond has ended up where he is, shielding himself from connection, but also seeking some kind of moral takeaway amongst the cracks in his disparate memories. Most of the power of the film’s meditative approach comes from its refusal to obviously connect these dots, allowing moments to come in waves (a suggestion of resistance to the Nazi occupation here, an unxpected death there), never quite satisfyingly landing, leaving viewers to wander through Trond’s mind with him.

More important than the major plot points are the subtler gestures, the shifts of gaze, the hands sneaking around waists, the melancholy yearning sprinkled throughout the more obvious actions. It can often feel as if nothing is happening between the spikes, but it is in these liminal spaces that the film’s biggest questions lie. The quietest moments can often feel dreamlike, as if meaning remains just beyond reach, and the young Trond seesaws between active engagement and dead-eyed disconnect. As churning music or the swells of an overpowering soundscape give growing gravity to these moments, a powerful truth surfaces: Trond has always avoided any kind of feeling, opting instead to view the more overwhelming events of his life as a detached outsider. 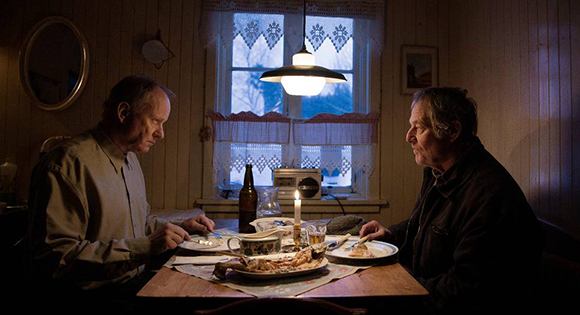 The reasons for this avoidance run deep. Trond, both in his old age and in his youth, is constantly weighing whether or not he is worthy of being the subject of his own story, whether the pieces of the present and the past are worth putting back together, whether deeply excavating oneself and one’s history is worth the potential pain. His life has been filled with quiet observations of the scars of those around him, but he seems to have trouble approaching his own open wounds with any intentional intimacy.

Like Trond himself, the film sometimes risks being simultaneously too specific and too elusive, telling both a story that will feel limited and foreign to many and wrapping it in broad gestures that might feel too engineered for generic epicness. But at the center is an age-old question about identity. Charles Dickens’ David Copperfield plays a brief role in tying all of the tenuous threads together, with that novel’s opening line accentuating Trond’s complicated relationship with his own story: “Whether I shall turn out to be the hero of my own life, or whether that station will be held by anybody else, these pages must show.” It’s a question that is too often easy to avoid, but one that has the generative potential to wake us from our wintry discontent.