Directed by Dean Parisot
The continuing adventures of two of the sweetest and most courteous anti-heroes in many a moon.

Over the years, these two have been snug as two bugs in a rug. They have rolled with the punches and tried to keep it together. They have married two Princesses (Erinn Hayes and Jayma Mays) and have two daughters (Samara Weaving and Brigette Lundy-Paine) who adore them. Now they learn from a time-traveling visitor from outer space (Kristen Schaal) that the Great Leader (Holland Taylor) has given them a deadline. They need to finally fulfill their destiny or all time and space will end. They have just a few hours to write a song that will bring unity and harmony to all. 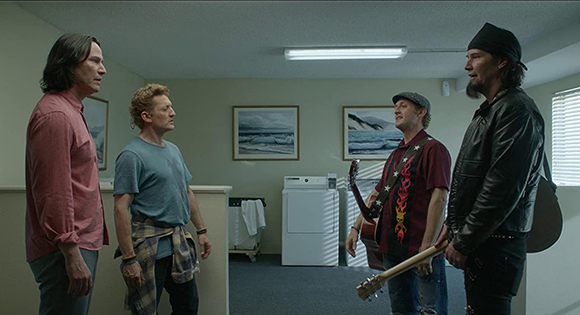 To accomplish this daunting task, they decide to travel into their future where they hope other versions of themselves can produce the song. Meanwhile their daughters decide to enlist the aid of Jimi Hendrix (DazMann Still), Louis Armstrong (Jeremiah Craft), Mozart (Daniel Dorr), a Chinese flutist (Ling Lun), and an indigenous drummer (Patty Anne Miller). Along the way they must square off against a killer robot (Anthony Carrigan) and Death (William Sadler). 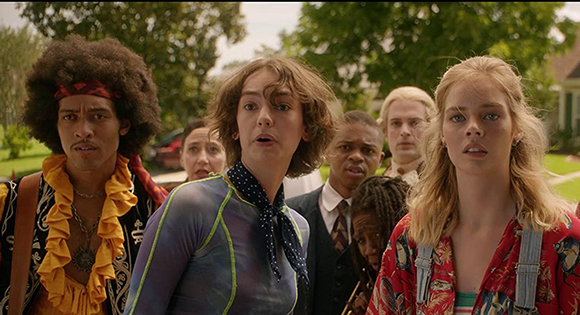 Can Bill and Ted and all their friends put their shoulders to the wheel and pull out all the stops? Sure they can. Is this a silly and entertaining movie. You bet.

We had a jolly time watching Bill and Ted on their latest adventure and hope to see them once again giving it all they've got as two of the sweetest and most courteous anti-heroes on the screen for many a moon!