Directed by Radha Blank
A hilarious and provocative read on race, creativity, and the pressure to succeed.

Hollywood loves an underdog story. Audiences cheer the climactic achievements of those who have overcome every obstacle in their way and made it through to the other side. The orchestral score swells, the familiar beats unfold, and triumph finally lands within reach.

Radha Blank’s The Forty-Year-Old Version could have followed suit, but instead, this writer-director-star remixes all of these old tropes and offers a more realistic, less obviously resurrective take that is both broadly hilarious and quietly harrowing. She invites viewers on a trip through the valleys of perceived failure, then changes the game and uncovers the transformative shades of gray that cinematic underdog tales typically tend to ignore. This relentless refusal to gloss over more authentic grit makes The Forty-Year-Old Version a true triumph. 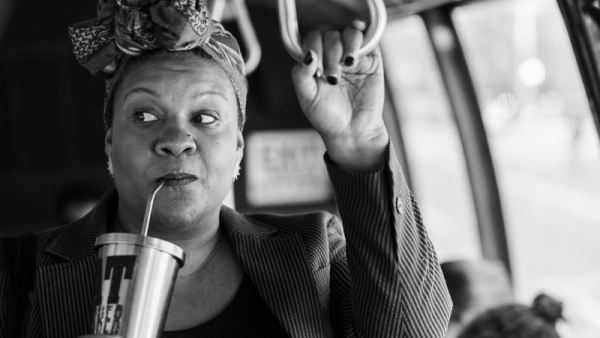 Radha Blank (the real writer and director playing a hilarious fictionalized version of herself) is about to hit the forty year milestone and she’s teetering on the edge. Once the toast of the 30-under-30 list, her playwriting career has taken a nosedive, she’s teaching drama in a high school to students who mercurially fawn over and bully her, and she just can’t seem to bring herself to call her brother back so the two of them can finally clean out their recently deceased mother’s apartment. Her kicks are few: she listens to her neighbors having sex, spends late nights channel surfing, and does her best to avoid getting roped into attending awful theater parties with her longtime friend and agent Archie (Peter Y. Kim). She can’t get a paycheck from the Black theaters she respects, and she can’t get anything but flighty, casually racist attention from the white-led theaters she needs.

Filmed in crisp black and white and featuring shots of both familiar and hidden corners of New York City, The Forty-Year-Old Version immediately conjures memories of Woody Allen’s Manhattan. But Blank’s unapologetically savage satire is much more than a melancholy and neurotic love letter to personal existential crisis. It’s also a weary and barbed exploration of the systemic roadblocks that interrupt a very specific and often marginalized experience of Big Apple life. Blank is both a woman and Black, and her story, while always wringing deep belly laughs, adds multiple maddening layers that are naturally absent from films that merely focus on the privileged angst of straight white men. Blank the filmmaker wants her audience to feel the constant pain inflicted by the extremely limited choices offered to Blank the character by the institutions and gatekeepers in her chosen industry. In the theater circles in which she travels, she can only either be tokenized or ignored; she can only either sell out or be left out.

When a moment of inspiration points our heroine toward the idea of creating a mixtape of her own hip hop rhymes under the new moniker “Radhamus Prime,” her story begins to unfold in even more moving, but still hilarious, ways. Rhyming gives Blank’s character an outlet for pent-up rage and sensuality, and it gives the film as a whole an outlet to take its skewering tone in endlessly inventive directions. As increasingly beautiful encounters with her aloof beatmaker (Oswin Benjamin) are juxtaposed with increasingly belittling encounters with a white theater producer (Reed Birney), Radha’s inner battle between audacious self-expression and acquiescence grows funnier and fiercer, trundling toward a climactic bridge-burning scene that feels more true-to-life and timely than any well-meaning, whitebread exploration of integration and reconciliation could ever achieve.

The Forty-Year-Old Version does not pull any punches, with Blank herself taking a self-reflective beating along the way. The relentless sharpness offers an invitation to honesty that is all too uncommon on the screen. Blank’s story might be extremely specific, but the paralyzing self-doubt and gaslighting systemic injustice that keeps her down could not be more universally recognizable. In the end, Blank’s self-effacing takedown of her own failures and of the structures that keep her flailing is also a clarion call for all individuals and our entire myopic nation to deeply challenge our presumptions and our institutions and commit to radical change. How can we find new ways to measure success and stop trying to hold ourselves back? When will our systems stop trying to hold marginalized voices hostage to our tokenizing whims? Blank has some hard-learned lessons to teach and this country desperately needs to be schooled.