The Man Who Sold His Skin

Directed by Kaouther Ben Hania
A uniquely charming and urgent parable about belonging.

As legislators politicize, pundits argue, and the media sensationalizes the issues at the center of the global migration crisis, personal stories that humanize the plights of refugees are increasingly necessary. But such true tales are often the first to be overshadowed and drowned out, leaving the very real human hopes, loves, and dreams for a better life that prompt so many to pack up their lives and move to be lost in the noise. While Kaouther Ben Hania’s The Man Who Sold His Skin is often both extremely specific and trying to skewer many things at once, it is also a delicate parable about hopes, loves, and dreams, one with the power to spark much needed conversations on the power of belonging and the necessity of maintaining control of one’s own story.

In 2011 Syria, Sam Ali (Yahya Mahayni) declares his love for upperclass girlfriend Abeer (Dea Liane) aboard public transportation, exuberantly calling for a revolution. Unfortunately, not everyone delights in Sam’s boisterousness and a pro-Assad witness tattles. Sam is arrested, in hot water with government authorities and in dire need of an escape. With some help, he crosses the border to Lebanon and watches in horror as his country is torn apart by violence and Abeer marries a government official (Saad Lostan) and moves to Europe. Without his home and his love, Sam is left rudderless in Beirut, drifting from scrounging for low-paying work and scavenging at art opening buffet tables in order to survive. 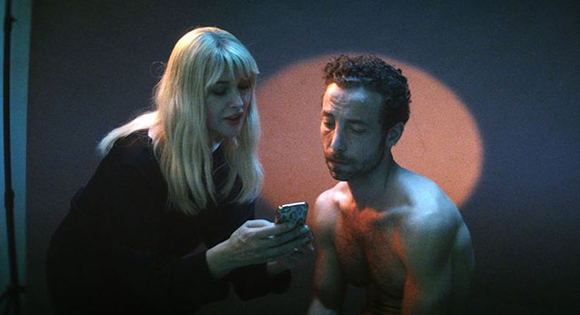 It’s at one of these openings that he encounters inscrutable artist Jeffrey Godefroi (Koen De Bouw) and his shady assistant Soraya (Monica Belluci). Jeffrey, apparently both the current enfant terrible and the toast of the international modern art scene, is on the prowl for his next project and he sees a manipulable canvas in Sam. At a bar, a bargain that would make Goethe proud is struck, with Sam the desperate Faust and Jeffrey a smarmy Satan. “You want my soul?” Sam asks. “I want your back,” Jeffrey answers. In exchange, Sam will get a chance to travel to Belgium and to reunite with his dear Abeer. But it’s obvious from the outset that Sam will soon be signing away much more than his body.

Jeffrey’s latest idea is to take Sam’s back and tattoo it with the image of a Schengen passport from shoulder to shoulder and necknape to tailbone. The artistic statement is meant to excoriate the fact that borders are permeable for commodified goods but are closed off for human movement and the surface power of Jeffrey’s political statement is obvious: By stamping Sam with a passport, he has transformed a human being into a thing, which would ironically make Sam’s journey across borders far easier. It’s an imaginative act, but once Sam arrives in Belgium and the snobbery of the art world comes up against the seriousness of those fighting for the human rights of Syrian refugees, this dreamer who really just wants to find his love becomes the hottest commodity in the battle between what is change-making art and what is harmful exploitation. 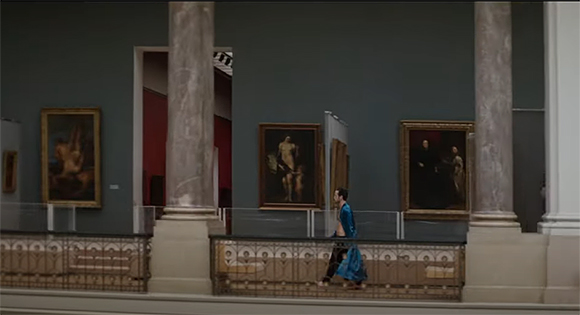 The Man Who Sold His Skin is surprisingly effective because of the relatively light touch it takes with such heavy subject matter. Sam is a brilliantly nuanced character, both bright-eyed and downtrodden, both very much in control and very much out of his element, and he is as charming as he is overwhelmed. Though the balance of what Ben Hania is attempting by telling Sam’s story is often tricky and though the film sometimes comes alarmingly close to using refugees’ realities in the flip ways that it is arguing against, the awkwardness of this give-and-take often feels wholly part of the director’s point. She keeps Sam’s perspective at the center of the proceedings, always approaching the film’s satirical sendup of the excesses of the art world and its severe examination of the inhumanity of migration legislation through the eyes of the character most at risk to the whims of both. Sam’s journey is ultimately about belonging, to a partner, to a country, to a community, to a narrative, to oneself, and the conditions under which all humans should be allowed to decide for themselves where they belong.

The spiritual questions posed by The Man Who Sold His Skin are both distressingly current and frustratingly perennial. Storytelling and art will always run the risk of exploiting the very experiences that they are aiming to lift up, especially when those stories belong to the most marginalized among us. But these truths must be told and absorbed in order for real transformation to take place, so an ongoing, dynamic conversation on how they are told, by whom, and to whom is essential. Luckily, even as this film finds fanciful fun in its colorfully overblown style, the urgent needs of so many in versions of Sam’s situation are never lost. Ben Hania seems absolutely intent on changing minds, but she sprinkles just enough absurdity throughout her storytelling to help its very important message float into the heart instead of sinking beneath the weight of a hopelessness that would leave it sadly unheard and unheeded.