Daughter of a Lost Bird

Directed by Brook Swaney
A healing documentary about a woman, adopted by a white family as a child, who connects with her Native birth mother.

Daughter of a Lost Bird was screened at the AFI Docs Film Festival.

Every once in a while, we spot a little bird in the grass. She seems to be on her own but looks healthy; her mother probably took good care of her until now. Did she fall from the nest in the giant oak tree? Did she try her wings and crash into a window pane? Or is she following her heart which has told her that it was time to leave the nest and explore the world?

Brook Swaney directs this emotionally rich documentary whose title brings to mind the plight of a lost bird seeking its spiritual home, which is filled with joy and darkness, hope and suffering, love and injustice.

Kendra Mylnechuk Potter was adopted into a loving white family as a child and grew up in a very white neighborhood. She didn't learn about her possible "Native-ness" until she was 18. Soon after she decides that she would like to connect with her birth mother. During her search, she discovers that she is from the Lummi nation of Washington State and her mother, April, was also adopted out of the community as a child. The older woman has reconnected with her relatives and is happy to introduce her daughter to them. Their coming together turns out to be a healing process for both Kendra and April. 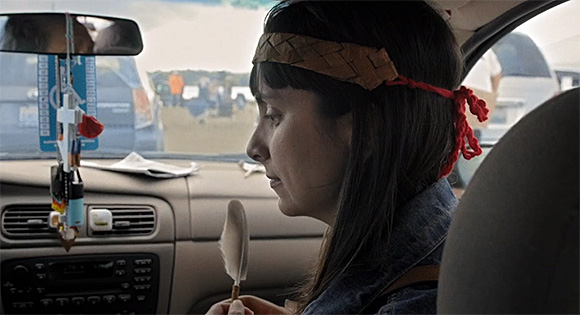 The film follows Kendra for seven years from her first phone call to April, when she admits she is scared, to her attendance at a Lummi gathering where she is able to take her own daughter to visit the grave of her great-grandfather. Along the way she learns that as many as 35% of Native children in the United States had been removed from their families, becoming pawns in the war to end tribal identities. Kendra recognizes that she is a perfect example of the assimilation sought by the government and admits that she has to deal with both "white guilt" and "Native anger."

This film is a portrait of two courageous women -- mother and daughter - - who are willing to allow us into their remarkable journey to find each other and their heritage.