The First 54 Years: An Abbreviated Manuel for Military Occupation

A sobering documentary about the effects on all sides of Israel's oppression of the Palestinian people during its military occupation.

Avi Mograbi is a fiercely independent Israeli filmmaker whose latest documentary The First 54 Years: An Abbreviated Manuel for Military Occupation presents a wide-ranging and hard-hitting overview of Israel's occupation of the Palestinian territories of the West Bank and Gaza Strip. He contends throughout that the goal of this colonialist occupation is the eventual total confiscation of Palestinian land. The sequence of events are presented in the form of a mock instructional video with Mograbi explaining the practices involved in expanding the occupation and the reasons used to justify them.

These steps are interspersed with reports by former Israeli soldiers from Breaking the Silence, an organization of veterans dedicated to exposing the inner workings of the military occupation. Mostly low- to mid-ranking soldiers charged with carrying out orders, they describe how they were trained, the commands they received, and the kinds of things they did. These reports raise questions about how the soldiers regarded the people over whom they had so much power. For example, in one frightening scene, a Palestinian boy is made to climb around live wires on an electrical pole to take down a Palestinian flag that had been placed there. 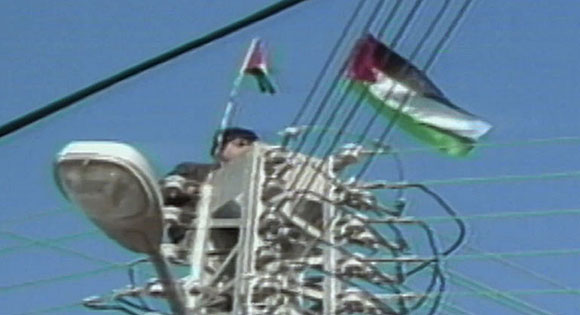 If you have been following what's happening in Palestine, the steps taken by Israel will be familiar: prohibition of the return of Palestinians who fled the territories during the 1967 war, building of settlements on confiscated lands and hilltops, the repression of any resistance, curfews, house demolitions, random house invasions and arrests, beatings, detention, checkpoints to limit movement, building of a barrier war separating sections of the land, and more.

The extent of these activities and their devastating effects, however, may be a shock to many viewers. Soldiers talk about being given a club and told they could do anything with it, especially breaking arms and legs. Applying the principle of "collective responsibility," whole neighborhoods are destroyed for any infraction by anybody of the rules of the military occupation. 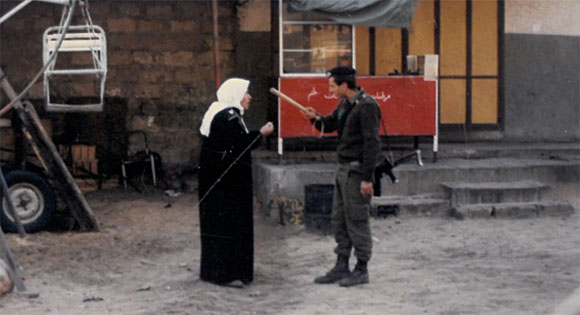 "There comes a moment in a war of this sort," observes Mograbi (in the clip below), "when both parties lose the hope of defeating the other. They don't presume they will succeed in releasing themselves from your long-standing dominion, and you cease to believe in reinstating normalization. It's a difficult moment when changes occur. Both you and the insurgents that confront you will resort to means the sole purpose of is to cause pain, to shed blood. It is a very undesirable moment, but it has to be taken into account."

This documentary is a sobering wake-up call eliciting our concern and our compassion for all those involved in military occupations in Israel/Palestine (the example given extensive analysis here) and elsewhere around the world.

Film: Avenge But One of My Eyes