Everything Everywhere All At Once

Directed by Dan Kwan, Daniel Scheinert
A wacky, life-affirming fantasy with a steady throughline of self-discovery and growing empathy typical of inner work.

To attempt to describe Everything Everywhere All At Once in words alone does this dizzying new classic a deep disservice. It’s a trip that must be experienced, felt, given in to, much like the multiverse-jumping adventure that its main character Evelyn Wang (Michelle Yeoh) finds herself facing. It’s convoluted but grounded, wild but humane, extremely ostentatious but truly affecting. Much like one character observes ("Here, all we get are a few specks of time where any of this actually makes sense!”), the film can be overwhelming and chaotic, but those willing to allow their minds and hearts to be exponentially and unexpectedly expanded will never forget it.

Before the fantastical fun begins, the setup seems as mundane as it comes. Evelyn is weary. Though she’s dreamed up tons of potential paths for herself, this aging Chinese-American immigrant is spinning her wheels, stuck on the least exciting one. She has ended up as the perpetually annoyed purveyor of a laundromat, the wife of the mild Waymond (Ke Huy Quan), and the mother of the stubborn Joy (Stephanie Hsu). She’s also desperately trying to pull receipts together to satisfy an ornery IRS auditor (Jamie Lee Curtis). To add to the stress, her sour-faced father Gong Gong (James Hong) is visiting and she’s trying to hide Joy’s queerness — and Joy’s girlfriend Becky (Tallie Medel) — from him. 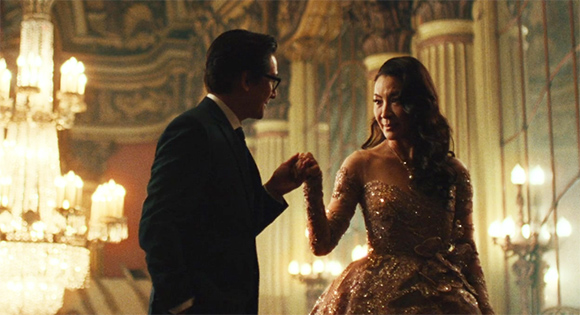 But as Evelyn, Waymond, and Gong Gong arrive at the IRS building to submit their documents, the universe quite literally flips upside down. In the elevator, Waymond suddenly becomes a new version of himself — “Alpha Waymond” — and he hurriedly reveals to Evelyn that every mistake and decision she has ever made has added to a multiverse of infinite threads — actually entire worlds — that are now under threat from a force of destructive chaos named Jobu Tupaki. The only hope of defeating this villain is for Evelyn to enter the multiverse, harness the powers of the different versions of herself in each world, combine them all, and fight. So, entirely confused and reluctantly curious, Evelyn takes on the challenge.

This description might bewilder some potential audience members, but even amidst the endless inventiveness and rapid-fire ridiculousness, a steady throughline of self-discovery and growing empathy emerges. Abundant surprises fly by, but it’s actually Evelyn’s increasing understanding of herself and her loved ones that is the main event. Even the most seemingly throwaway laugh lines and sight gags begin to take on layers of profoundity. 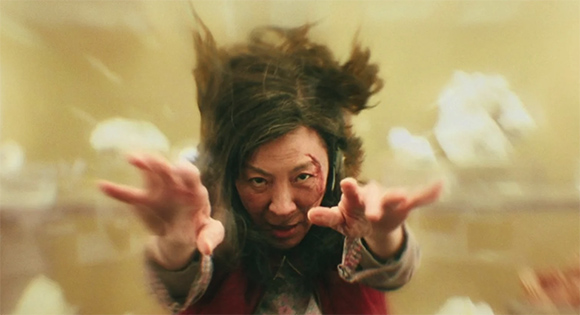 When Alpha Waymond tells Evelyn that she is living the worst version of herself and then reveals that she is “capable of anything because she is so bad at everything,” the jab at first brings a chuckle. But then it unfolds to reveal the deeply existential opportunity that all journeys of inner work contain. The film is full of such double-edged truths, a multitude of moments that start off tickling the funny bone and then immediately open into wider, wiser significance.

Directors Dan Kwan and Daniel Scheinert (together known as “The Daniels”) are clearly having tons of fun. Bizarre inside jokes abound and the sheer technical prowess on display is breathtaking. But the most powerful aspect of Everything Everywhere All At Once is how effortlessly it offers a fully fleshed out, inspiring story of transformation and becoming, all dressed up in the sparkly costume of a cheeky superhero action film. It’s a feat that truly must be seen to be believed, and anyone who sees it will leave believing more fully in their own power to shape as many futures as possible.