Directed by Max Walker-Silverman
A simple, sensitive film about love, loss, and the nourishment provided by music.

Max Walker-Silverman’s debut as a director touches the heart with this its poignant character study of two elders meeting up after years apart in the desert and mountainous region of Colorado. Faye (Dale Dickey) is a widow who still feels the sting of grief. She has parked her camper at site by a lake. It’s a place near where she grew up. 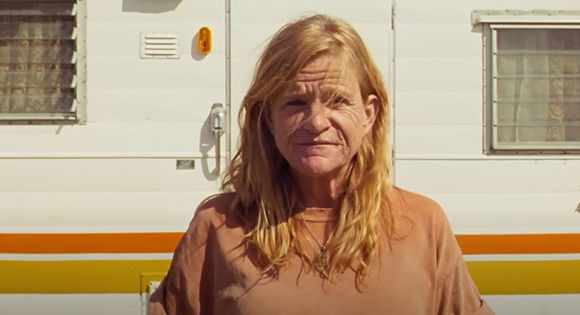 Faye has a meaningful rhythm to her days orchestrated around early morning coffee, catching fish and crayfish in the lake, bird-watching, and star-gazing at night. When a young girl and her four brothers ask her to move her camper so they can dig up their father who is buried there to put him elsewhere, she declines. But when their car engine breaks down, she lets them borrow hers until they can get it fixed. They give her their canoe in exchange.

Used to being alone, Faye takes this incident in stride. Invited to dinner by a lesbian couple (Michelle Wilson and Benja K. Thomas) from a nearby campsite, she witnesses their difficulty deciding whether or not to marry. Each day she greets the postman (John Way) hoping that he will bring her a letter from an old friend she’s asked to meet her. 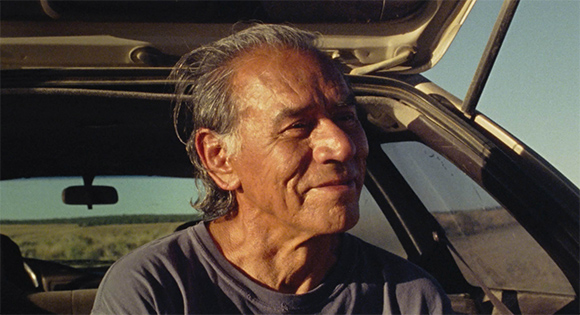 One day Lito (Wes Studi) arrives. They were friends in high school and shared a first kiss at this very lake. His wife has died, and he’s lonely too. As he and Faye enjoy singing country songs together, it remains to be seen how the yearning for love and companionship they both feel will unfold.

This is a slow-moving, gentle film that invites viewers to identify with Faye and Lito as they tentatively express a variety of emotions. For Faye, music becomes a marker of her moods. Each day she spins the dial on her transistor radio to see what song will sooth her soul. Will it be a love song, a sad song, a happy song? With this as her spiritual practice, we sense that no matter what happens with Lito, she will be okay.