Directed by Margaret Brown
A thematically rich documentary about the last ship to bring enslaved people to the United States.

In 1808 the U.S. Congress made it illegal for Americans to engage in the slave trade and the importation of enslaved people. But in 1860, wealthy slave-owner and human trafficker Timothy Meaher made a bet that he could smuggle captured Africans to Mobile, Alabama, on the ship called the Clotilda. After the Africans were unloaded, the wooden ship which was set on fire and sunk in the Mobile River in an attempt to hide the arrival of more enslaved persons.

In1867 after the slaves were emancipated, many of the 110 men, women and children from the Clotilda set up a freedom community called Africatown, north of Mobile, Alabama. For generations, their descendants heard about the Clotilda but the wreck of the ship was not found to confirm the stories. Then in 2019 divers discovered the ship in the mud of the river. There was evidence it had been burned and the shape and structure of the ship confirmed it had been used to transport enslaved people.

“This is a hero’s journey, more than a story about sad exploitation,” film director Margaret Brown said in a Zoom interview. “There are definitely obstacles in [the descendants’] path and examples of environmental injustice and things like that; it is a very layered story.” 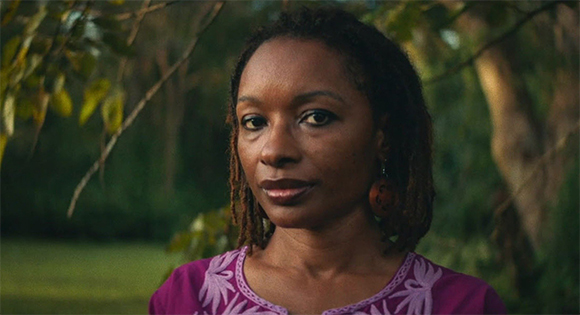 This thematically rich documentary conveys the narrative insights and courage of community leaders, direct descendants from the Clotilda, oral historians, folklorists, archaeologists, and more. Especially poignant are the readings from Zora Neale Hurston’s book Barracoon: The Story of the Last Black Cargo. Included are the words Cudjoe Lewis, a Clotilda survivor, whose descendant appears in the film and shows us his grave

Darron Paterson, who was president of the Clotilda Descendants Association, has referred to this film as “a game changer — it is really going to shine a light a light on Africatown, which is a microcosm of America.”

The town’s history is one story here, but the filmmakers also bring us up to date. They show Africatown has been completely surrounded by heavy industry and besieged by toxins and pollution from lumber yards, paper mills, chemical plants, and waste-water treatment facilities. The other justice issue facing this city, as well as other black communities, is the ways in which corporate America is profiting on black monuments, civic centers, and local parks. The Clotilda descendants are determined to maintain control on how their story is memorialized.