Directed by Paul Cox
A beguiling Australian film about the tender romance between two elderly individuals who remind us that each stage of life has its own kind of love.

"The great thing about getting older is that you don't lose all the other ages you've been," writer Madeleine L'Engle has wisely observed. Relishing the accumulation of experiences, adventures, and memories is one of the pleasures of the last stages in life. We have the leisure to savor what once was and still is a part of us: our younger selves in all their variety.

Claire (Julia Blake) lives with her husband John (Terry Norris) in Adelaide, Australia. They have been married for 45 years but the intimacy has gone out of their relationship. That is why she's so enlivened by a letter that arrives from Andreas (Charles Tingwell), her first love from over 50 years ago. They had a passionate affair in Belgium where he was a student of music and she was the daughter of an Australian diplomat.

When they meet again, the love that they shared so long ago is still there, untouched by time, marriage, family, and grandchildren. "You have a sweet, sentimental strain," Claire tells Andreas, whose wife died 30 years ago. In an emotionally affecting scene, he's required to stand by his wife's grave as the body is exhumed since the cemetery is going to be replaced by a real estate development.

The sexual connection between Claire and Andreas is still strong and they find solace in each other's arms. Meanwhile Claire's husband is stunned when she tells him about her relationship with Andreas. After years of taking his wife for granted and focusing all of his attention on his own needs, John moves between the conflicting emotions of anger, jealousy, and remorse. Their son David (Robert Menzies) tries to help him through this crisis.

This is the second movie Australian director Paul Cox has made about conscious aging. The first was A Woman's Tale. He brings large reserves of sensitivity, wisdom, and creativity to this challenging task and succeeds convincingly.

The film is also a moving meditation on relationship as a spiritual path. As John Welwood has written, "Love becomes a path of awakening — rousing us from the sleep of old, unconscious patterns into the freshness and immediacy of living more fully in the present, in accord with who we really are."

Claire and Andreas harvest their memories of the past, share the stories of their lives, and talk of life, love, and death. When he is hospitalized in a battle against advanced cancer, she is there to comfort him. Andrea's daughter Monique (Marta Dusseldorp) accepts her father's lover with happiness.

Innocence tenderly shows us how each stage of life has its own kind of love. For Andreas and Claire, their rekindled passion enables them to live more fully in the present. Equally important, as he reminds her: "Love becomes more real the closer it comes to death." 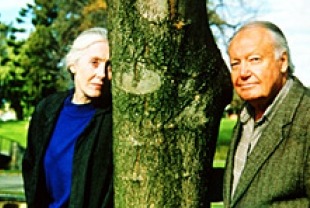