Directed by Garry Marshall
A comic fairy tale that shows all young girls are princesses inside, although many don't know it and some never will.

Mia Thermopolis (Anne Hathaway) lives in a refurbished firehouse in San Francisco with her mother Helen (Caroline Goodall), an artist. Her life is turned upside down when she learns that she is the heir-apparent to the crown of the small European principality of Genovia. "I don't want to run my own country," Mia complains. "I just want to pass tenth grade." But her grandmother, Queen Clarisse Renaldi (Julie Andrews in a smashing performance), is convinced that she has all the makings of a princess. Mia is given the option of taking some etiquette lessons in preparation for an upcoming royal dinner. After the evening, she can decide whether or not to accept her royal calling.

The shy Mia experiences a variety of confusions and roadblocks along the way to her new status, especially at school when someone leaks to the press that she's a princess. Her relationship with Lilly (Heather Metarazzo), her best friend, is changed drastically. A sarcastic makeover artist says to her: "If Brooke Shields married Groucho Marx, that child would have your eyebrows." The popular cheerleaders at the posh school start to take notice of this outsider and Josh (Erik von Detten), the most popular guy in her class, asks her out on a date, much to the dismay of Lilly's brother Michael (Robert Schwartzman) who has a crush on her. During her "princess lessons," Joseph (Hector Elizondo), Genovia's head of security, proves himself to be an ally while chauffering Mia around in a limo.

Garry Marshall (Runaway Bride) directs this comic fairy tale based on a novel by Meg Cabot. The screenplay by Gina Wendkos contains plenty of formulaic material but manages to be inspiring anyway. All young girls are princesses inside, although many don't know it and some never will. The more movies that let us in on this wonderful secret, the better. 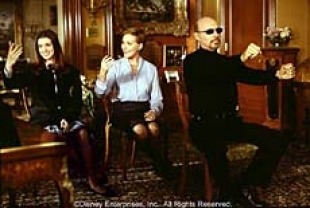