Directed by Terry Zwigoff
A witty look at an adolescent rebel's attempts to be an authentic person in the present day bogus culture of trivial pursuits.

"Awkward in a hundred ways, clumsy in a thousand, still I go on," the Chinese Zen master Yueh-shan expressed many years ago. Sounds like the plight of teenagers across America. It certainly describes Enid (Thora Birch from American Beauty) and Rebecca (Scarlett Johansson from The Horse Whisperer), best friends who have just graduated from a California high school. They can't wait to kiss goodbye to all the "retards" in the class, by which they mean the popular kids who buy into the consumer culture.

Enid, who carries around a sketchbook, is the caustic one whereas Rebecca is the brainy one who wants desperately to get on to the next stage of their lives by getting an apartment together. Bored with their repeated efforts to win the affection of Josh (Brad Renfro), a convenience store clerk, they come up with the idea of teasing Seymour (Steve Buscemi), a lonely middle-aged man who has written a personal ad seeking to reconnect with a blonde he met briefly.

Much to Rebecca's dismay, Enid befriends this "loser" who collects 78 rpm blues and jazz records. She actually has respect for his refusal to conform to the reigning monoculture of the day that celebrates third-rate blues music, cappuccinos, and strip malls. Another way of looking at it is that Enid sees a snapshot of her future in Seymour's hermit existence.

Part of the delightful cleverness of Ghost World is its nonstop critique of America as a consumer theme park where people are obsessed with kitsch and inauthentic experiences. While Enid and her mild-mannered father (Bob Balaban) eat breakfast, the television in the background presents an energy company ad about its advocacy of the environment. In a video store, a brainless clerk recommends 9 1/2 Weeks to a customer who wants a copy of Fellini's 8 1/2. And at a club the clientele ignore a genuine African-American blues singer and then come to life when a tenth-rate band promises to rock the place with the blues. Also fitting right in with these scenes are those involving Roberta (Illeana Douglas), a pretentious art teacher whose efforts to get her students to "externalize the internal" are very funny.

Crumb director Terry Zwigoff has pulled off the best comedy of the year so far with this witty look at an adolescent rebel's attempts to be an authentic person in a bogus culture of trivial pursuits. Joseph Campbell in celebrating the hero's quest characterized it as "that part of us that wants to become fearless." Although Enid's efforts to be herself wind up hurting those around her, she persists with a stubborn willfulness. The last scene could be right out of a Fellini movie. It is just right with its mix of mystery, fantasy, and idiosyncracy. 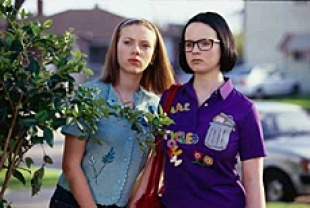 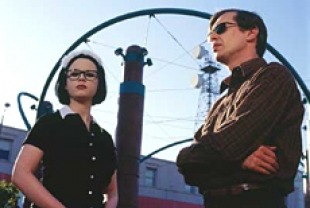