Directed by Eric Valli
A beautiful and thematically rich Nepalese film about the many lessons learned by some villagers from the high mountains during their annual yak caravan.

"Imagine that every person in the world is enlightened but you," Buddha says. "They are all your teachers, each doing just the right things to help you learn patience, perfect wisdom, perfect compassion." This quotation provides the perfect setup for Himalaya, an astonishingly beautiful and thematically rich Nepalese film that presents many vanishing elements of a faraway Tibetan culture.

High in the mountainous Dolpo region of Nepal, Tinle (Thinlen Lhondup), an elderly chieftain, learns that his son Lhakpa has died on an expedition with Karma (Gurgyon Kyap) and other male members of the tribe. Stricken with grief, this aged and weather-worn leader decides that he will take charge of the animal yak caravan, an arduous journey over the mountains to exchange salt for grain.

The rebellious Karma decides to leave earlier than the date established as being most fortuitous by the community's shamans. Most of the able men of the tribe go with him. Tinle persuades Norbou (Karma Tenzing Nyima Lama), his son who is an artist in a monastery, to accompany him on the caravan. He is joined by Lhakpa's widow Pema (Lhakpa Tsamchoe), her young son Pasang (Karma Wangiel), and the eldest members of the community. The boy has dreams of one day becoming chief.

Eric Valli directs this extraordinary drama shot on location in Dolpo, Nepal. He has imbued it with the power and subtlety of a Shakespearean drama about power, leadership ability, tradition, and change. The cinematography by Eric Guichard and Jean-Paul Meurisse is breathtaking, and the music by Bruno Coulais provides a perfect aural mood for the caravan's pilgrimage over the mountains.

Perhaps the most fascinating character is Norbu, the monk who decides to leave the tranquility of his ritualized life to fulfill a family obligation. When his feisty and proud father asks why he chose to join him, he responds: "When two paths open up before you, choose the hardest one." The ordeals they face include a treacherous trek over a dangerous mountain pass that is very narrow and a battle against a fierce snow storm.

In the end, Norbu views his experiences as lessons from the Buddha where the teachers are his father, sister-in-law, and young nephew. He uses the caravan as material for a fresco about a leader's childhood. Norbu concludes that everyone is blessed and "the gods are triumphant."

The DVD manages to enhance an already extraordinary film with many extras. It includes audio commentary by dirctor Eric Valli, a 26-minute "making of" documentary, the theatrical trailer, and the original electronic press kit with interviews and features. 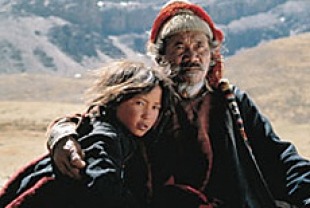