Directed by Sydney Pollack
A rousing comedy set in New York City that deals with the agonies and ecstasies of the acting profession, the confusion of sexual roles, and the importance of lovers being friends.

Tootsie, directed by Sydney Pollack, was one of the best comedies of 1982. Most of its entertainment value and dramatic vibrancy can be attributed to the acting finesse of Dustin Hoffman and the literary riches of the superb screenplay by Larry Gelbart and Murray Schisgal. Although many will choose to enjoy only the film's farcical features, others no doubt will also savor its insights into the agonies and ecstasies of the acting profession, the confusion of sexual roles, and the importance of lovers being friends.

Michael Dorsey (Dustin Hoffman) is a dedicated actor who gives all he's got to his art but has to work as a part-time waiter and drama coach in order to survive in New York City. His savvy agent (Sydney Pollack) informs him that his name is mud in theatre circles because he's so difficult to work with.

Michael's roommate Jeff (Bill Murray) is equally intense. He's a playwright who is only interested in the kind of audience that would come to the theatre on a rainy night. Together they want to raise money for one of Jeff's serious plays. When Michael's self-denigrating girlfriend Sandy (Teri Garr) is rejected for a juicy role in a TV soap opera called "Southwest General," he dresses up as a woman and auditions for the part. Michael's "Dorothy Michaels" isn't much to look at, but she's got just the spunk the producer (Doris Belack) wants for the character of a no-nonsense hospital administrator.

As Dorothy, Michael sees the shabby way women are treated by men and the little everyday humiliations they suffer. When his soap opera character becomes a cult heroine to viewers for espousing a feminist philosophy, Michael finds himself more open to his feelings.

Julie (Jessica Lange), a glamorous actress in "Southwest General," is having trouble coping with life. Dorothy befriends her. Soon Julie is pouring out her feelings about being a single parent, the emptiness of her relationship with the male chauvinist director (Dabney Coleman) of the soap opera, and the confusions ensuing from her career. Dorothy spends the Easter holidays with Julie and her widowed father (Charles Durning).

While his Dorothy persona is learning what women want in men, Michael, now hopelessly in love with Julie, is treating Sandy like a disposable object. Michael's charade as the soap opera superstar gets in deep trouble when Julie's dad proposes, and the show's leading man (George Gaynes) tries to seduce Dorothy. The humorous finale of Tootsie is too delicious to reveal.

Dustin Hoffman's performance as Michael/Dorothy is a tour de force of nuance and intimacy. Whenever this actor plays vulnerable characters, he shines. The acting of the rest of the cast is top-drawer, especially especially Teri Garr, Bill Murray, and Jessica Lange; the latter won an Oscar for her performance

In one of the best lines in Larry Gelbart and Murray Schisgal's screenplay, Michael confesses: "I was a better man as a woman with a woman than I've ever been as a man with a woman." We agree. As more men get in touch with their feminine sides and women with their internalized masculinity, hopefully, we'll eventually see a great rapprochement between the sexes. 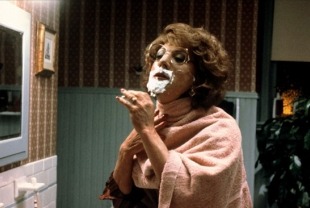 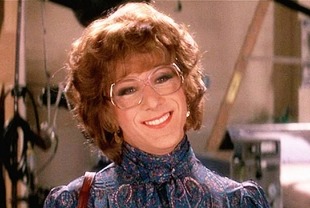