Directed by Michael Cuesta
A daring drama about a poetic and vulnerable teen who is nurtured by someone most of us would consider to be abominable.

In a voiceover narration that opens this daring and unconventional drama, Howie Blitzer (Paul Franklin Dano), a fifteen-year-old, stands on an overpass above the Long Island Expressway (L.I.E.) and notes people who have died there in car crashes— songwriter Harry Chapin, filmmaker Alan J. Pakula, and his mother. "It has taken a lot of people," he says, "and I hope it doesn't get me."

At their expensive home in suburbia, Howie's father Marty (Bruce Altman), a construction contractor, has a hot babe who gets all of his attention. At school, Howie falls under the bad influence of Gary (Billy Kay) who robs houses just for the fun of it. Soon the two boys are dreaming of escaping to California together. They steal some guns from the apartment of Big John (Brian Cox), a former Marine and pederast, who has for years been preying on the teenage boys of the community.

When Gary leaves town with some stolen cash, Howie is left to make things right with Big John, who wants sexual favors in lieu of hard cash. Howie refuses. But the boy has no one else to turn to when his father is sent to prison for embezzlement.

Similar in milieu and spirit to American Beauty, this film directed by Michael Cuesta is getting a lot of critical attention. It was originally showcased at last spring's New Directors/New Films series. This strangely compelling story shows us that we can never write off any human being as worthless or abominable — in this case, a sex offender and predator who reveals himself to have a nurturing side.

Battered by one disappointment after another, the vulnerable and besieged Howie finds solace with Big John who comforts him when he breaks down in tears after being abandoned by his irresponsible father. And in a moment of intimate sharing, this quiet youth recites some poetry he has written and even quotes a Walt Whitman favorite. Big John is overwhelmed by Howie. In a display of respect and restraint, he does not try to have sex with him. After the boy has gone to bed, he retreats to the living room piano where he sings "Danny Boy" as an elegy to all the sadness in the world he has seen and experienced. That scene alone will make this a powerful film experience for some viewers. It's a deeply spiritual moment, an expression of compassion from someone that our expectations would lead us to believe is a most unlikely source.

The DVD extras include two audio tracks, one with the star Brian Cox, and one with the director Michael Cuesta in which he discusses, among other things, why he took on such controversial material. 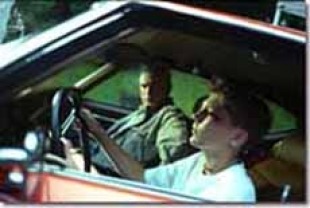