Directed by Kenneth A. Carlson
A vivid portrait of one high school football team that gives us a snapshot of American values on parade.

Here is a rousing and illuminating documentary about the 1999 high school football season in Massillon, Ohio, where the essence of the community seems to be expressed in their avid attention to this sport. The writer and director, Kenneth A. Carlson, is a native son and preacher's kid. In this blue-collar town, everybody stands behind the team that has won 22 state championships. Only problem is — last season they only won four games versus six losses. Now the future of the school athletic program may rest with them. Massillon High officials are making a last ditch effort to raise funds through a school tax levy, and a string of victories by the team would give this campaign a big boost.

Shot on high-definition video, this fast-paced documentary introduces us to several key members of the football team and sweeps us along to the pep rallies and actual games. Carlson also covers the rigorous workouts, the lectures of the coaches, the enmity toward longstanding rivals, and the boosterism of parents.

This is not a puff piece uncritically hailing high school football. Carlson enables us to ponder the ill effects of the American obsession with winning, the bending of rules for athletes, and the sadness of people whose lives are so empty that they are forced to live out their hopes and dreams at stadiums. In a vivid portrait of one high school football season, Carlson gives us a snapshot of American values on parade.

In addition to trailers and deleted scenes, the DVD includes the complete 1951 "Touchdown Town" archiveal news reel, a Massillon Hall of Champions portrait gallery, and a where-are-they-now update with photos. 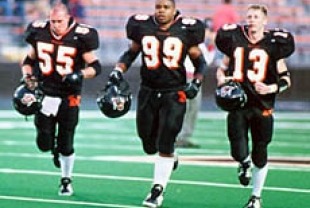