An elegant brunette (Laura Elena Harring) seated in the back of a limousine is about to be shot to death when a speeding vehicle crashes into the car. The woman miraculously survives and wanders away in a state of shock. Meanwhile Betty (Naomi Watts), an attractive blonde actress from Canada, has just arrived in the city. At her aunt's empty apartment, she discovers the brunette. This stranger, who has amnesia, calls herself Rita after seeing a Gilda poster in the apartment. The two women decide to do some detective work to find out who Rita really is.

Across town, Adam (Justin Theroux), a hotshot young director, is ordered by the authoritarian head of the studio to cast Camilla Rhodes (Melissa George) as the lead actress in the film. When the self-absorbed director doesn't get the point, a sinister fellow who calls himself "the cowboy" spells out the consequences of going against this order from on high.

In the spirit of Blue Velvet, Wild at Heart, and Lost Highway, writer and director David Lynch sets before our eyes his weird and always evocative interpretations of modern life, an existence rife with role-playing, power, desire, violence, and mystery. Nothing is ever fully explained (by now we're used to that). Here Lynch's favorite themes are perfectly matched by his choice of milieu: Hollywood, the city that manufactures dreams for the world.

Mulholland Drive makes a sharp turn about half way into the drama. The best you can do is go with the cinematic flow and let your need to know fall by the wayside. Angelo Badalementi's mesmerizing music takes you beyond the realm of reason and sense. Now there, you've got it even though you don't get it. 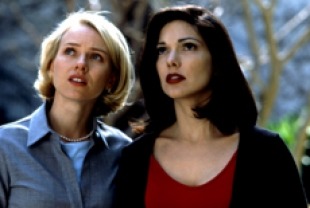