The Man Who Wasn't There

Directed by Joel Coen
A black-and-white tour de force by the Coen Brothers about all the changes that rain down upon a passive man when he decides to change his life.

The wry narrator of this stylish black-and-white drama set in the summer of 1949 is Ed Crane (Billy Bob Thornton), a tight-lipped middle-aged man who cuts hair in a barbershop owned by Frank (Michael Badalucco), his talkative brother-in-law. Ed's wife Doris (Frances McDormand) is an unhappy woman who loves to shop, has a drinking problem, and harbors a continuing resentment of her Italian relatives.

After stewing in a rage over Doris's affair with Big Dave (James Gandolfini), her boss at the town's department store, the passive Ed makes a move to change his life big time. Part of that change involves raising $10,000 to become a silent partner in a dry-cleaning business with Creighton Tolliver (Jon Polito), an out-of-town wheeler-dealer. The other bold step involves confronting Big Dave about the affair.

This engaging film noirish story follows the Coen brothers' O Brother, Where Art Thou?, a zany and hilarious bluegrass version of Homer's Odyssey. As they did in that one, the Coens drench this story with colorful characters and bizarre twists of fate. It's quite amazing to watch Billy Bob Thornton as Ed take in the full sweep of changes that rain down upon him after he decides to take charge of his life rather than always just reacting to what happens. It's a lark to watch this straight-faced barber as he patiently unzips the dress of his bossy wife; as he indifferently cuts the hair of the town's docile parade of men and boys; as he detects the special gleam in Big Dave's eye when he says of Doris, "She's a rare one"; or as he discovers an oasis of peace listening to the piano playing of Birdy Abundas (Scarlett Johansson), the teenage daughter of a neighbor.

In her book The Quiet Voice of Soul, Tian Dayton makes the startling revelation that the words of the Psalm 23, "Yea, though I walk through the valley of the shadow of death," can be understood as the walk through our own dark side. As Ed slowly walks through a close encounter with the dark sides of himself as a greedy, angry, and egocentric man, he comes to a new appreciation for the secrets of others. In a moment of odd intimacy, Big Dave's wife (Katherine Borowitz) even shares with him their encounter with extraterrestrials while on a camping trip years ago. In the end, Ed savors the power of his dark secrets, even though he eventually must pay the ultimate price for his actions.

At one point Birdy says to Ed: "You know what you are? You're an enthusiast." It is a telling moment — one which shows just how far the shy and unemotional barber has gone in his quest to change his life. 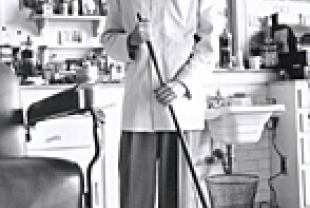