Life as a House

Directed by Irwin Winkler
A soulful drama about the courage and persistence of a very alienated middle-aged man to give birth to himself in the world before leaving it.

"Three words give you a fever. Three words nail you to the bed: Change your life," Christian Bobin has written. Forty-five-year-old George Monroe (Kevin Kline) lives alone in a dilapidated shack his father built years ago on a cliff overlooking the Pacific Ocean. Despite the stunning vistas, he wakes up every day without a shred of wonder or awe. He's worked for the same architectural firm for 20 years making building models; he hates this job. He's emotionally dead too, disconnected from his ex-wife Robin (Kristin Scott Thomas) and his teenage son Sam (Hayden Christensen). The idea of changing his life doesn't even cross his mind. He's nailed to his bed in fear.

All George's repressed anger erupts on the day when he is fired from his job. Outside the building, he collapses. At the hospital, this bitter middle-ager learns that he is terminally ill with only three or four months to live. George decides to use this spiritual emergency as an opportunity to act upon a dream he's had for years — to tear down the shack and build a new house he's designed. He orders Sam to join him in this adventurous undertaking, realizing that it is a chance he has to get to really know his boy and express his love.

At one point, Robin asks George if he can recall the last time he felt truly happy and he recalls a moment of being totally present with six-year-old Sam while standing in the ocean, feeling his son's heart beating next to his own as waves splashed over them. Of course, now Sam is 16, taking drugs, rebellious, and cut off from any emotions except the anger he feels in regard to George, Robin, and his distant stepfather Peter (Jamey Sheridan). Hearing this, Sam says, "You haven't been happy in ten years?"

Irwin Winkler directs this heartfelt drama about the courageous efforts of one very alienated man to give birth to himself in the world before leaving it. The soul-stirring screenplay by Mark Andrus (As Good As It Gets) shows how George's transformation lifts the spirits of those around him in a variety of positive ways. The house building process reveals a secret the Amish have known for years: creating something beautiful draws people together and nurtures the seeds of love, hope, kindness, and generosity within them.

While helping George out, Sam turns his own life around. Robin falls in love all over again with her ex-husband, who now seems to be a much gentler, focused, and compassionate man. Among the others who are caught up in George's project are Coleen (Mary Steenburgen), a neighbor he once dated; her teenage daughter Alyssa (Jena Malone), who has a crush on Sam; David Dokos (Sam Robards), a difficult and angry neighbor; and Robin's two young sons.

It is exhilarating to watch George escape the prison he has built out of his hatred for his alcoholic father who never loved or respected him. By sharing stories and experiences from his own life with Sam, he finds a way to be really present with his son. The anger and disappointment of the past are used as fuel for the project of building a dream house for someone very special. The surprising finale of Life as a House will water the seeds of love, hope, kindness, and generosity in you. 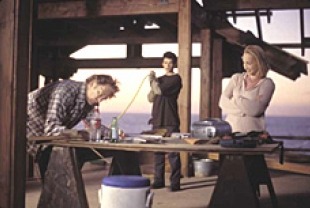