Directed by John Carpenter
An engaging science fiction drama that provides us with an opportunity to look afresh at ourselves and to ponder what it means to be children of the Universe.

In this sci-fi drama directed by John Carpenter, a being from another planet is shot down over northern Wisconsin in his spaceship. The alien (Jeff Bridges), who possesses great intelligence, clones himself from a piece of a dead human's hair and presto! — he is a lookalike for Jenny Hayden's (Karen Allen) late husband Scott. Initially shocked and terrified, she has no other thought than to flee from this strange being. The Starman kidnaps Jenny and orders her to drive him to Arizona where in three days he will rendezvous with the mother-ship from his planet.

The U.S. Army is interested in finding out more about the object they shot down, so they send Mark Shermin (Charles Martin Smith), a government agent with a special interest in extraterrestrial studies, to investigate the crash. When he finds the starship, the scientist is ecstatic about the opportunity to meet an extraterrestrial being. The military wants to capture the Starman for laboratory examination.

With a screenplay by Bruce A. Evans and Raynold Gideon, Starman contains plot developments reminiscent of The Man Who Fell to Earth (1976), Close Encounters of the Third Kind, and E. T. (1982). Yet the other-worlder in this drama is a childlike, benevolent creature who has a magic healing touch and a kind heart. As Jenny slowly warms to him, she realizes his desperate situation and decides to help him elude the military forces hotly pursuing him.

Jeff Bridges is at once charming and disarming as the other-worlder. He is humorous and touching as he learns about love, sex, food, energy, violence, and human foibles.Karen Allen is excellent as Jenny, a lonely widow whose affection and courage are rewarded when the Starman bestows upon her a gift that nature had denied. Charles Martin Smith, who was superb in Never Cry Wolf, again gives a convincing portrait of a maverick scientist who proves to be an ally for the Starman against Earth chauvinists. No wonder the Starman can say at the end: "You are a strange species. Unlike any other, you are at your best when things are worst."

Science fiction writer Ray Bradbury has written: "We are all Aristotle's children, which is to say children of the Universe, not just of Earth, or Mars, or this system, but to the whole grand fireworks." Starman was 1984's best science fiction movie. It provides an opportunity for us to look afresh at ourselves and to ponder what it means to be children of the Universe. 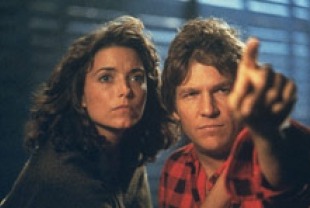 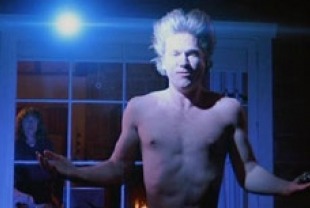