Harry Potter and the Sorcerer's Stone

Directed by Chris Columbus
A spiritual tale that enacts before our imaginations the huge antagonisms of good and evil, challenging us to hallow the sacred energies of friendship, fearlessness, and love.

The great mythologist Joseph Campbell and his wife lived in a Greenwich Village apartment in Manhattan. One day while trying to park on the street, he began backing their car into an open spot when suddenly a little boy appeared standing on the sidewalk. The kid shouted at Campbell: "You can't park here. I'm a fire hydrant." The mythologist respectfully honored the boy's imagination and found another place to park.

No doubt a few years later, the boy would count himself a fan of Harry Potter.

J. K. Rowling's Harry Potter fantasy books have been translated into 47 languages and have sold over 150 million copies all over the world. These tales of wizardry speak to the boundless imagination in us all. She stands in the noble and daring tradition pioneered by C. S. Lewis, J. R. R. Tolkien, Ursula Le Guin, and Madeleine L'Engle.

Harry Potter and the Sorcerer's Stone, based on the first book in Rowling's seven-volume series, is a spiritual tale that enacts before our imaginations the huge antagonisms of good versus evil. Representing the good is a modest 11-year-old lad who gets a lot of help from his friends. These children have much to teach us about the sacred energies of friendship, fearlessness, and love.

Director Chris Columbus (Bicentennial Man, Mrs. Doubtfire, Home Alone) and screenplay writer Steve Kloves (Wonder Boys) stick close to the book, and the result is a satisfying and phantasmagorical jaunt into the magical world of aspiring witches and wizards and wonders.

As the story opens, Harry Potter (Daniel Radcliffe) is a small, skinny, bespectacled orphan with an unusual lightning bolt shaped scar on his forehead. Since he was a baby, he has lived with his Uncle Vernon Dursley (Richard Griffiths) and Aunt Petunia (Fiona Shaw) who treat him shamefully. Their spoiled son Dudley (Harry Melling) does everything within his power to make life miserable for Harry. On a visit to a zoo with the Dursleys, Harry talks to a boa constrictor and liberates it from his cage. When asked where he came from, the snake points to the sign "Bred in Captivity." Harry empathizes with the creature's longing for freedom.

Then on his eleventh birthday, Hagrid (Robbie Coltrane), a gentle giant, arrives with news that Harry has been invited to attend Hogwarts School of Witchcraft and Wizardry. On this glorious day of liberation, the boy is taken to Diagon Alley, a magical place, to get his school uniform and supplies and to withdraw money that has been left for him in a bank run by clever goblins. After mysteriously passing through a wall at Gate 9 3/4 in the train station, Harry meets Ron Weasley (Rupert Grint) and Hermione Granger (Emma Watson), fellow first-year students, who become his best friends.

At Hogwarts School, Harry is surprised to discover that he is famous. Everyone seems to already know what he has just learned from Hagrid — that his wizard parents were murdered by Voldemort, a wizard who went over to the dark side and is still so feared that people don't speak his name out loud. He tried to kill Harry as well — his scar is the reminder of that moment — but was unable to do so.

The eleven-year-old doesn't quite know what to make of all this attention. Harry is treated as someone special by Professor Dumbledore (Richard Harris), the wise headmaster with a majestic white beard. Although he has several run-ins with Professor McGonagall (Maggie Smith), who is able to shape-shift into a tabby cat, he respects her difficult task of maintaining order in a place with friendly ghosts and shifting staircases.

Harry also doesn't quite know what to make of Professor Quirrell (Ian Hart), who seems rather timid and creepy. Professor Snape (Alan Rickman) definitely rubs him the wrong way with his glaring looks and nasty comments on Harry's incompetence as a tyro wizard. Out of all the adults at Hogwarts School, his favorite is the lovable Hagrid who always blurts out things he shouldn't say and has a soft spot in his heart for Norbert, a baby dragon.

Harry's adventures during his first year in school provide plenty of chills, thrills, and spells to impress the wizard in all of us. Check out the shenanigans of Nearly Headless Nick (John Cleese), the game resembling soccer played on broomsticks, the talking hat, the invisibility cloak, the three-headed dog, the Devil's snare, the mountain troll, and a terrifying game of chess with unusual pieces.

In one of the most moving scenes in the drama, Harry stands in front of the mirror of Erised and sees the faces of his mother and father looking back lovingly at him. Although tempted to stay in this comforting place, he must fulfill his calling as a wizard. This means he must use all his prowess to stop Voldemort, who is attempting to revive his power through the use of a sorcerer's stone that will give him eternal life.

Instead of coming across as a pint-sized superhero, Harry Potter is a flawed hero who blunders his way through a series of mistakes. Fortunatey, he gets a lot of assistance from the plucky Ron and the very smart and sassy Hermione. They learn to rely upon their own resources while never forgetting their connection to something greater — their house, their school, and their community.

In his thought-provoking book The Sibling Society, Robert Bly laments the sad fact that today's youth do not have initiation rites to usher them into a new stage of life and help them find their own place in the world. Lacking such rituals, young people often are left to find their own ways of making the transition into adulthood. During this time, they need to be given attention, respect, good psychic food, and unpolluted stories. Harry Potter and the Sorcerer's Stone provides those necessary resources and a bit more.

The DVD is loaded with extras to delight the imaginations of old and young. There are new scenes; an in-depth, interactive tour of Hogwarts' halls and classrooms; a lesson in Quidditch,; a visit to the library to open a screaming book; plus games, downloads, screensavers, and more. The VHS edition also has the extra scenes. 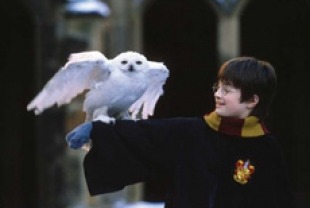 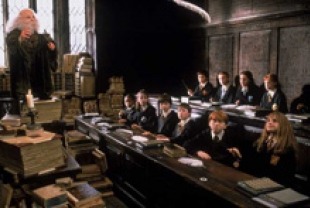