Jung (War) in the Land of the Mujaheddin

Directed by Alberto Vendemmiati, Fabrizio Lazzaretti, Giuseppe Petitto
An extraordinary Italian documentary about the agony, suffering, and losses of the Afghan people who have lived in a war zone for 25 years.

Over 110 million landmines remain embedded in the soil of 68 countries. They claim 26,000 victims annually. And landmines don't discriminate. They kill and maim civilians just as easily as they do soldiers. In Afghanistan, the most land-mined place on Earth, men, women, and children continue to be injured every day by this terrible weapon of war.

Jung (War) in the Land of the Mujaheddin is an extraordinary documentary by Italian filmmakers Alberto Vendemmiati, Fabrizio Lazzaretti, and Giuseppe Petitto. It recently had its North American premiere at the 2001 Human Rights Watch International Film Festival where it won the Nestor Almendros Prize for courage and commitment in human rights filmmaking. It was shot over several months from 1999 to 2000 charting the daring humanitarian mission of Gino Strata, a surgeon; Kate Rowlands, an English nurse; and Ettore Mo, a journalist, to set up an emergency hospital in the mountains of northeast Afghanistan.

The documentary elicits our compassion with its unrelenting presentation of the agony, suffering, and losses of the Afghan people who have lived in a war zone for 25 years. The toll: one million dead, one million mutilated, and four million refugees. The filmmakers put faces on these victims: the youngsters whose schools have been destroyed and who labor as blacksmiths making weapons; mothers who are forced to beg at street markets for their children and other orphans in their care; the sick and the dying, who have no one to look after them; and the unending stream of refugees, some of whom note they would rather be dead than be alive with no place to call home.

At the time of this film, the Taliban controlled most of Afghanistan with their main opposition coming from the Northern Alliance. Some of the zealous Muslims who are in prison speak of their holy war. Scenes of the Taliban at prayer are alternated with coverage of skirmishes with the Northern Alliance soldiers. Afghan women speak of being attacked by zealous Muslims for allowing their feet to be seen through their sandals in the marketplace.

When Dr. Strata finally gets his hospital set up to serve the civilian wounded, he and his staff are overwhelmed by the number of patients who have lost arms, legs, and hands to landmines. The hospital becomes an oasis of hope in a place of unending suffering, pain, and death. Hopefully Jung (War) In the Land of the Mujaheddin will help spur on the burgeoning international campaign to ban landmines. 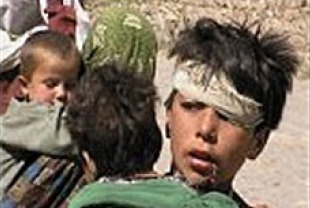