Directed by Danis Tanovic
A vivid film about the insanity of war and the dreadful things it can do to those who drench themselves in hate.

During the Bosnian War in 1993, a group of Bosnian soldiers are lost in the fog between enemy lines. In the morning light, they are sitting ducks for Serbian soldiers. Ciki (Branko Djuric) survives and finds shelter in a bunker. A Serbian commander sends two soldiers to check out the trench. Ciki kills one and wounds Nino (Rene Bitorajac), the other.

Left alone together, the two enemies smoke cigarettes and discover they have dated the same woman. But their sworn enmity for each other keeps coming to the surface, stifling feelings of empathy or mutuality. Their interlude is interrupted when Cera (Filip Sovagovic), a comrade of Ciki’s, regains consciousness and learns that he’s lying on top of a bouncing landmine. If he tries to get up, it will detonate.

Now convinced they need help, the two soldiers signal their respective regiments and the call goes out to the local United Nations UNPROFOR. Sgt. Marchand (Georges Siatidis) disobeys an order from his superior and heads off to the trench in a tank with several of his men. He’s tired of being a bystander when something can be done to assist those in peril.

Writer and director Danis Tanovic has made a vivid and unforgettable film about the insanity of war and the dreadful things it can do to those who drench themselves in hate and violence. The drama’s complexity deepens and expands when Marchand bumps into Jane Livingstone (Katrin Cartlidge), an international journalist hungry for a story on the tense situation in the bunker. She forces Colonel Soft (Simon Callow) of the UN High Command in Zagreb to hurry to the scene. He sends in a German bomb expert to try and defuse the landmine.

The one thing that no one can defuse is the incendiary hatred felt by the Bosnian Ciki and the Serbian Nino. Despite the presence of neutral parties and the promise of return to their own lines, they are willing to throw it all away in the name of revenge.

Although Tanovic populates this war drama with Bosnians, Serbians, an English officer, a Frenchman, and a German, he fails to overtly place Americans into the tragedy. Certainly he must have known that the United States is the biggest arms dealer in the world and that thousands of American-made deadly devices like the bouncing landmine have been sold all around the globe. Americans played a part in that insane war, and it was not a noble thing. No Man's Land, an official entry from Bosnia, won the Academy Award for Best Foreign Language Film of 2001. 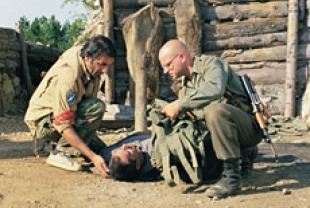