Directed by David Lynch
Based on a true account of the disfigured nineteenth-century Englishman, reveals the potential of the human spirit to transcend genetic impairments.

Dr. Frederick Treves (Anthony Hopkins), a surgeon, first sees John Merrick (John Hurt) in 1884 on exhibit in a show managed by Bytes (Freddie Jones). The doctor borrows the elephant man, as he is called, for a lecture delivered before the London Pathological Society. Merrick's affliction is a disfiguring tumor disease characterized by cauliflower-like growths on his skin and a misshapen head with a mass of bony lumps.

Later, after his "owner" beats him, the Elephant Man is given shelter in the London Hospital. Once Treves learns that his patient is able to read and has a mind of his own, he convinces Mr. Gomm (Sir John Gielgud), the chairman of the institution's board, to give Merrick care.

During his stay, Merrick is befriended by Treves and his wife (Hannah Gordon), the head matron (Dame Wendy Hiller), a young nurse (Lesley Dunlop), and Mrs. Kendal (Anne Bancroft), a well-known actress and socialite. And despite his persecution by a porter (Michael Elphick) and abuse once again by Bytes, Merrick finds a sense of peace and fulfillment in his last days before accidental death by asphyxiation in 1890.

David Lynch (Blue Velvet) directs this drama based on the actual case history of the nineteenth-century Englishman John Merrick. Literary critic Leslie Fiedler maintains that freaks (as he calls them) stir "both supernatural terror and natural sympathies" because they "challenge conventional boundaries between male and female, sexed and sexless, animal and human, large and small, self and other." In this very interesting and moving film, we are challenged to clarify our values in regard to "very special people" (a term which should replace the freak epithet). We are also invited to examine the complex nuances of benevolence and the potential of the human spirit to transcend genetic impairments.

The DVD version of The Elephant Man contains new, retrospective cast and crew interviews along with the theatrical trailer. 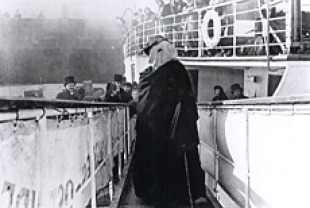