Directed by Robert Altman
A witty and entertaining upstairs, downstairs drama set at a luxurious English estate over a weekend in 1932.

While these people enjoy a brief shooting party by day and play bridge and listen to Ivor's music in the evening, the real intrigue goes on downstairs where the service staff bustles with hundreds of details and gossips unmercifully about the upstairs hosts and their guests. Alan Bates, as the butler Jennings, overseas footmen George (Richard E. Grant) and Robert (Derek Jacobi). The highly efficient and aloof Mrs. Wilson (Helen Mirren) is the housekeeper who is responsible for the maids including Elsie (Emily Watson), Sir William's favorite and a woman who knows how to make the most out of the little she has. Young and inexperienced Mary (Kelly Macdonald), Lady Constance's maid, is all eyes and ears as she moves through this household.

While eating together downstairs, the servants learn from Robert Parks (Clive Owen), Raymond's valet, that he was raised in an orphanage. This information sets in motion a series of reverberations ending in the death of Sir William and the appearance of a daft police inspector (Stephen Fry) who bungles his way through an investigation of the murder (in fact, the host turns out to have been done in twice).

Robert Altman directs this witty drama and makes the most of the wonderful ensemble cast of actors and actresses. All the details are just right from the luxurious estate of Gosford Park to the costumes worn by the rich and their servants. The screenplay by Julian Fellowes, based on an idea of Robert Altman and Bob Balaban, is clever to the nth degree drawing out all the viperish qualities of the upper class and the venom of those who wait on them. Gosford Park is a top-drawer entertainment from start to finish. 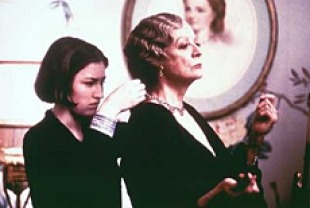