Directed by Marc Forster
A strangely entrancing drama about the redemptive power of love in the life of a Southern racist corrections officer who is imprisoned in anger and hatred.

Hank Grotowski (Billy Bob Thornton) is a Georgia prison guard working on Death Row. He's learned to hate blacks from his racist father Buck (Peter Boyle) who lives in their family home, which looks to be on its last legs, and who is still filled with anger and regret over the wife who quit on him by committing suicide. And then there's Sonny Grotowski (Heath Ledger), who is also a corrections officer. Both his father and grandfather see him as a weakling, too sensitive and emotional.

Getting ready for the execution of Lawrence Musgrove (Sean Combs), an African-American cop killer, Hank is worried that Sonny won't be able to handle his responsibilities. Meanwhile the prisoner's wife Leticia (Halle Berry in her Academy Award-winning performance) comes for a last visit with her husband. Her overweight son Tyrell (Caronji Calhoun) has inherited his dad's gift for drawing.

After his last dinner, Musgrove draws portraits of Hank and Sonny and takes pride in this gift. "Only a human can truly see another human being," he says.

Monster's Ball is directed by Swiss filmmaker Marc Forster from an original screenplay by Milo Addica and Will Rokos. This strangely entrancing drama conveys the redemptive power of love in Hank, a hard man who has closed down his emotions long ago and is imprisoned in anger and hatred. What does it take for a racist to see blacks in a new light? A change of heart and a grief so deep and wide that it pulls down the walls between himself and other suffering souls.

After the execution of her husband in the electric chair, Leticia's son is hit by a car. Hank takes them to the hospital where the boy dies. With no one else to comfort her, Leticia reaches out to this stranger in a raw act of sexual intimacy. Stunned by what has taken place, these unlikely lovers forge a fleeting relationship out of their mutual loneliness and grief.

Hank quits his job as a corrections officer and purchases a gas station. But his slowly blooming relationship with Leticia is put in jeopardy when his father cuts her down with a racial slur that is as quick and surprising as a bullet from a gun. The finale brings Leticia and Hank together at his homestead after she's been evicted from her home.

Monster's Ball proves that new life comes in small incremental steps to those who are patient enough to wade through pain and suffering. After a life given over to a milieu of death and violence, Hank finds a way back to his heart through Leticia. Monster's Ball is a dark movie that ends with a glimmer of hope that perhaps this couple can nourish each other's souls and find a way into the future together. 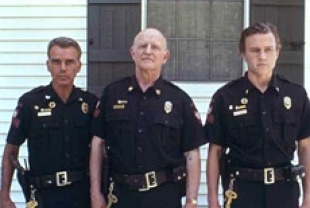