Directed by Mira Nair
A captivating film that conveys the joy, sadness, fear, envy, and resentment that often come to the surface at weddings.

"A ritual," says theologian Tom Driver, "is a party at which emotions are welcome." And weddings are the kind of rituals where feelings rise to the surface and flow all over the place. Two people are embarking on a new journey and family, friends, and strangers are there to wish them well.

Lalit Verma (Naseeruddin Shan) is a New Delhi businessman who, along with his wife Pimmi (Lillete Dubey) has arranged the wedding of their daughter Aditi (Vasundhara Das) to Hemant Rai (Parvan Dabas), an Indian engineer from Houston. Unbeknownst to her parents, she is still in love with a married talk-show host. The only one in the family who seems unaffected by all the anxiety about the up-coming event is Aditi's brother, who spends most of his time watching television.

Aditi gets cold feet before the wedding and doesn't know whether she'll be able to go through with it. Meanwhile, P.K. Dube (Vijay Raaz), the wedding manager responsible for organizing and catering the expensive event, is distracted when he falls in love with Alice (Tilotama Shome), the Verma family maid. This bachelor's nervousness comes to the fore in his habit of eating marigolds, the traditional flower used in Indian ceremonies.

Mira Nair (Salaam Bombay!, Kama Sutra: A Tale of Love) directs this captivating cross-cultural comedy of manners. She proves herself equal to the task of portraying what she calls the "masti" (the intoxicating zest for life) of these Punjabi Indians, who try to blend the best of ancient culture with modern Western ways. Aditi's coquettish cousin Ayesha (Neha Dubey) begins flirting with Rahul Chadha (Randeep Hooda), a Sydney college student who has recently returned to India. Ria Verma (Shefali Shetty), who is still single at 28, declares her interest in becoming a writer. However, this young woman's delight soon turns to fear when Tej Puri (Rajat Kapoor) arrives from America. He is a wealthy patron of the Verma family. Ria's revelation about him causes a firestorm of emotions.

Screenplay writer Sabrina Dhawan has done a marvelous job conveying the joy, sadness, fear, envy, and resentment that often come to the surface at weddings. The lively and eclectic music of Mychael Danna is a real treat, and the cinematography of Declan Quinn vividly pinpoints the class differences between these suburbanites and the masses of poor people on the streets of New Delhi.

The DVD includes an audio commentary by director Mira Nair with anecdotes about the filming and stories about how the actors got involved, as well as the usual comments on the look of the film and her intentions for it. There is also a brief behind-the-scenes featurette. 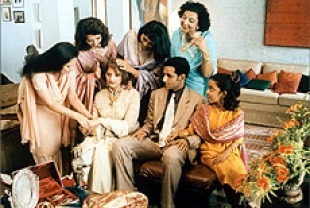