The Hunchback of Notre Dame

Directed by Gary Tousdale, Kirk Wise
An animated musical that makes a good case for self-esteem, tolerance, and social conscience.

This animated musical is based on the classic Victor Hugo novel and is set in fifteenth century Paris. Quasimodo (voiced by Tom Hulce) is a deformed young man who has been confined to the bell tower of Notre Dame cathedral since birth. His imperious overseer is Judge Frollo (Tony Jay), a self-righteous tyrant who wants to rid the city of all gypsies. Desperately yearning for some human contact — since his only real friends are gargoyles — Quasi (as he's called) descends to the streets and soon finds himself crowned "King" for the Feast of Fools celebration.

When the crowd turns angry and pelts him with objects, he saved from further torment and humiliation by Esmeralda (Demi Moore), a gypsy dancer who cherishes freedom more than anything else in the world. Her beauty and soulfulness put Quasi in a lovesick swoon. Later, when she and Phoebus (Kevin Kline), a conscience-driven Captain of the Guards, are in trouble, the hunchback of Notre Dame gets his chance to be a hero.

The best number with music by Alan Menken and lyrics by Stephen Schwartz is "God Help the Outcasts." As Disney's thirty-fourth full-length animated feature, this musical drama makes a good case for self-esteem, tolerance, and social conscience. The DVD edition includes a "Making of" featurette, some sing-along features, and audio commentary. 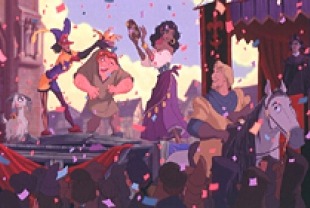