Directed by Michael Haneke
A riveting psychodrama about an icy and aloof woman who is enslaved to her sadomasochistic desires.

Erika Kohut (Isabelle Huppert) is a 40-year-old music teacher at the Vienna Conservatory who lives with her domineering mother (Annie Girardot). With her students, she is a rigorous perfectionist who can't abide sloppiness or emotionalism. Schubert and Schumann loom large in Erika's pantheon of great composers.

The piano teacher's life is upended when Walter Klemmer (Benoît Magimel), a 30-year-old pianist and ice hockey enthusiast, sees her perform at a recital and is put into a swoon. Definitely irritated by his self-confidence and his skill as a pianist, she reluctantly accepts him as a student in her master class. Hearing Walter play one of her favorites, she says to him: "Schubert's dynamics range from scream to whisper, not loud to soft." The youthful admirer realizes that Erika's world is built upon the fierce intensity of control and the thrill of extremes.

This realization is borne out when the music teacher plays a terrible prank on a weak-willed pupil whom Walter has coddled. Erika and her admirer square off in a wild and weird sexual encounter in the conservatory's bathroom. In the struggle for control, the piano teacher wins and informs Walter that she'll spell out the terms of their relationship in a letter.

The Piano Teacher won the top prizes at last year's Cannes Film Festival: the Grant Jury Prize, Best Actress for Isabelle Huppert and Best Actor for Benoît Magimel. The French film is directed by Michael Haneke (Code Unknown) based on a 1983 novel by Austrian writer Elfriede Jelinek. Isabelle Hupert puts in an incredible performance as the icy Erika, a sadomasochist whose need for control over her own humiliation is rapacious. Benoît Magimel is convincing as her talented pupil who has charisma to burn. Their bizarre relationship takes several surprising twists and turns that are violent, degrading, and ultimately alienating. This riveting psychodrama probes the subject of sadomasochism with laser-like intensity. Similar to the recent Intimacy it explores new territory in sexual politics. 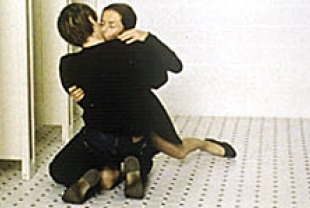