Directed by John Lee Hancock
A soulful tribute to the spiritual firepower of yearning and the way a community supports the dreams of one of its gifted members.

In some African indigenous cultures, an unborn child is asked why he is coming to the Earth. After an answer is received, the elders of the tribe prepare a ritual space for the child. After birth, he is surrounded by things that will help him remember and accomplish his purpose. The goal of the community is to make sure that everyone is properly fulfilling his mission.

The spirit of The Rookie is somewhat similar to this African tradition, only the force that guides a boy into fulfilling the mission of his life is not an elder but St. Rita, the patron saint of impossible dreams. The standout screenplay by Mike Rich (Finding Forrester) gives this heartfelt drama its deep roots and buoyant wings. And the graceful direction of John Lee Hancock (My Dog Skip) accentuates the story's celebration of the powerful presence and meaning of a small community in the life of one of its members.

Jimmy Morris (Trevor Morgan) grows up the son of a work obsessed Navy CPO (Brian Cox) who is constantly moving the family from one place to another. The boy doesn't get any support from his father for his dream of becoming a major league baseball player. He is not even there for Jimmy's Little League debut as a pitcher who strikes out 13 players. Nonetheless, Jim (Dennis Quaid) follows his dream and plays in the minor leagues until a shoulder injury ends his brief career. He settles down as a high school baseball coach and chemistry teacher in Big Lake, Texas. Late at night, Jim calms himself down after a hard day of work by throwing balls against a screen in a desolate area.

As the coach of a losing baseball team, Jim amazes all the players with the speed of his fast ball, which nearly breaks the hand of a high school catcher. He tries desperately to jack up the team and make them into winners. Meanwhile, they wonder why he hasn't taken another shot at the majors. The team presents him with a challenge: if they win the district championship, he must try out for the major leagues again.

One of the best things about The Rookie is that screenplay writer Rich and director Hancock demonstrate a deep respect for the Texans in Big Lake who stand behind Jim and his dream. In one of the most delightful developments in the drama, a long-time supporter comes up with a novel solution for keeping the deer from eating all the grass on the baseball field.

Dennis Quaid puts in a superb performance in this true story of the Texan who in 1999 became the oldest rookie major league baseball pitcher to take the field in 40 years. Rachel Griffiths is just right as his loving wife, and Angus T. Jones enthusiastically plays his adoring son. The Rookie salutes the singular power of yearning in our lives while also paying tribute to the unique ways in which we're always dependent on others to make our dreams come true.

The extras on the DVD include an agreeable audio commentary by Dennis Quaid and director John Lee Hancock, a 20-minute documentary on the life of the real-life Jim Morris, and a segment of baseball tips called "Spring Training." 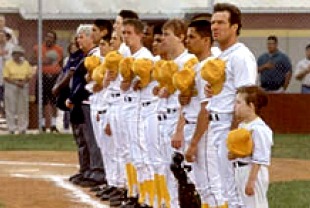