Directed by Chris Weitz, Paul Weitz
A buoyant romantic comedy about friendship, love, and the truth that we're all in this together.

Will (Hugh Grant) is a 38-year-old Londoner who revels in his freedom. He doesn't work; instead, he lives off the royalties of his songwriter father's one hit, "Santa's Super Sleigh," that has become a standard Christmas carol. He spends a lot of time shopping for CDs and watching game shows on TV. Will loves dating all kinds of women and is adamant about not getting too attached to them.

The screenplay has been adapted by Peter Hedges (What's Eating Gilbert Grape), Chris Weitz, and Paul Weitz from a bestselling novel by Nick Hornby (High Fidelity). The opening scene establishes Will's responsibility avoiding personality as the young bachelor tells two friends that he was a really bad choice to be the godfather for their infant daughter.

Meanwhile, in another part of London, Marcus (Nicholas Hoult), a lonely 12-year-old, lives with his vegetarian, hippie mother Fiona (Toni Collette), who is given to fits of depression. As if things weren't bad enough at home, he is the target of scorn and ridicule at school where he is viewed as a twerp.

Always on the lookout for new women to date, Will sets his sights on single mothers and decides to pose as one at a single parent's club meeting. There he is smitten by Susie (Victoria Smurfit). On a picnic outing with her, minus his pretend son he claims is with his mother for the day, Will meets Marcus; his mother was unable to join them on the outing. It is a day filled with memorable events: Marcus throws a loaf of bread made by Fiona into a pond and kills a duck. Will covers for him with a park ranger. Marcus arrives home to find Fiona barely alive after a suicide attempt. The whole group rushes to the hospital. Now the boy realizes that two in a family is not enough. He needs a backup person to help him with all the troubles in his life. He chooses Will.

This very appealing comedy directed by Paul and Chris Weitz (American Pie) contains some very funny voiceovers by Will after his life is turned upside down by Marcus. Despite all his efforts to remain cool and unfazed when the boy latches on to him, this self-admitted shallow fellow suddenly finds himself emotionally connected to Marcus. And it even results in warm fuzzy feelings Will is completely unaccustomed to.

The two unlikely friends form a close bond. Will helps Marcus deal with a crush he has on an older girl at school, and the boy provides some assistance when Will takes a romantic interest in Rachel (Rachel Weisz), who has a fiercely possessive son.

The mystics say that love is the pattern that stitches the universe together. We all need someone to lean on when troubles surround us and we falter. Eventually Will allows himself to be hoisted out of his isolated "island" existence, as he calls it. He loosens up and gives expression to his nurturing capacities. He realizes that just as every singer needs a backup band, every soul yearns for the fellowship of a small circle of friends. About a Boy is a buoyant romantic comedy about friendship, love, and the truth that we're all in this together.

The DVD has an audio commentary by the directors, including their thoughts on some deleted scenes. One featurette covers the making of the film, and another looks at the history of the song “Santa’s Super Sleigh.” 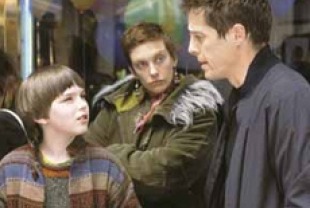