Directed by Zacharias Kunuk
An Inuit masterpiece that will give you goosebumps as its uncanny tale of love, communal discord, and justice unfolds.

The word myth derives from the Greek mythos which means “to murmur with closed lips, to mutter, to moan.” The Inuit of Canada have a salutary tradition of oral storytelling that stretches back thousands of years. The people who first muttered these tales were nomadic hunter-gatherers trying to feed their families on the Arctic tundra, the top of the world. They found in these sagas intimations of their yearnings. They learned the dangers of breaking taboos and yielding to those passions, especially if it threatened the solidarity of the group.

Director Zacharias Kunuk has fashioned a cinematic masterpiece out of the shards of an Inuit myth about love, murder, family, and communal discord. This is the first film made by Inuit and presented in their own language. Unlike the dim-witted and uninvolving myth presented in The Lord of the Rings: The Fellowship of the Ring, this stirring drama transports us to an exotic world and speaks directly to our deepest emotions of fear, anger, abandonment, forgiveness, and reconciliation. It is an example of storytelling at its finest.

At the core of The Fast Runner (Atanarjuat) is a recognition of the important role of the spirit world in the lives of the Inuit. Here shamans are forced to square off against malevolent forces that create disharmony and hate in the community.

The people of Igloolik live under a shamanic curse that has shattered their togetherness. Sauri (Eugene Ipkarnak) is the ruthless camp leader. His son Oki (Peter-Henry Arnatsiaq) is betrothed to Atuat (Sylvia Ivalu). When Atanarjuat (Natar Ungalaaq), the “Fast Runner,” flirts with her, the hot-tempered Oki challenges him to a ritualistic “head-punching” contest in which they take turns landing brutal single blows to each other’s temples. With the assistance of some good spirits, Atanarjuat wins and weds Atuat. They settle down in a single tent with his brother Amaqjuaq (Pakkak Innukshuk), who is known as the “Strong One,” and his wife.

A few years later, Atanarjuat goes hunting. Whileresting at Sauri’s camp, he is seduced by Puja (Lucy Tulugarjuk), Oki’s sister. He takes her as his second wife. But he sends her back to her family after she has sex one night with Amaqjuaq. Puja tells Oki that her husband tried to kill her. Vowing revenge, Oki and his friends kill Amaqjuaq while he is sleeping but Atanarjuat escapes naked into the cold wilderness. With Oki and two others in pursuit, the Fast Runner proves true to his name. He eventually finds sanctuary with Qulitalik (Pauloosie Qulitalik), a shaman who fled Iglootik years ago. Together, they plan for Atanarjuat’s return and the need for a concerted attack on the evil spirit that has caused such havoc in the community.

The Fast Runner (Atanarjuat) is a three-hour drama that will give you goosebumps as its uncanny tale of love, communal discord, and justice unfolds. The extraordinary camerawork by Norm Cohn captures all the primal beauty and ferocity of the Arctic landscape and light. The film also provides an engaging overview of Inuit culture and lifestyle in the old days with its portrait of hunting practices, food distribution, animal pelt clothing, oil lamps, water preservation, dog teams, sunglasses, and much more. The Fast Runner (Atamarjuat) won Camera d’Or at the 2001 Cannes Film Festival and six Genie Awards (Canadian Oscars) including Best Picture and Best Director. 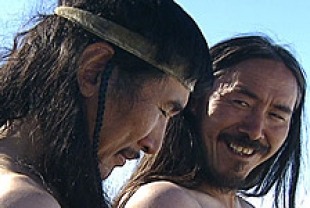