Directed by Nicole Holofcener
One of the funniest and endearing dramas of 2002 about two oddball sisters and their vulnerable mother.

In Walking Words, Eduardo Galeano writes: "The Church says: The body is a sin. Science says: The body is a machine. Advertising says: The body is a business. The body says: I am a fiesta." That may be the feeling of the bodies of some enlightened souls but most of us were raised to believe that our bodies are never good enough. Comparing ourselves to models and celebrities, we feel self-conscious and always come up short in the beauty game. We get this from the media, and sometimes from our parents, who in many subtle but telling ways pass on their habit energy of feeling poorly about their physical appearance.

Such is the case in Lovely & Amazing, one of the funniest and most endearing films of the year. It was written and directed by Nicole Holofcener, whose 1996 film Walking and Talking impressed with its wry humor and deep respect for its characters' idiosyncracies. That same spirit is evident in nearly every scene in this quirky drama about a middle-aged mom and her two screwed-up daughters. And let's not forget her adopted eight year-old African-American daughter whose birth mother was a crack addict. What these women share in common is a dislike for their bodies and an affinity for linking up with men who are incapable of saying anything nice about them.

Jane Marks (Brenda Blethyn) has plenty of time on her hands even though she has adopted Annie(Raven Goodwin). Feeling the need to improve her appearance and get rid of the fat on her stomach, she decides to have a liposuction operation. To complicate matters, Jane falls into a middlescence swoon over her good-looking doctor (Michael Nouri).

Her eldest daughter, Michelle (Catherine Keener) was Homecoming Queen in high school but since then it has been all downhill for her. Bill (Clark Gregg) has lost interest in her and is upset that she hasn't had a job for years. Michelle usually winds up sleeping with her young daughter for comfort. Her creative efforts have come to naught. She's created some little chairs as gift items, but they are turned down by the store. After being humiliated by one of the female clerks, Michelle throws some profanity her way. She also has a big problem containing her anger which rages inside her like an unruly intruder. Eventually, she takes a lowly job at a one-hour photo shop where her boss is Jordan (Jake Gyllenhaal), a lonely teenager who immediately takes a fancy to her.

Michelle's sister Elizabeth (Emily Mortimer) is certainly more easy-going but she has low self-esteem. This insecurity is not helped by a boyfriend (James Le Gros) who doesn't evidence one shred of interest in her acting career. In addition, Elizabeth has chosen an agent who treats her like dirt and wants credit for getting her a teensy-weensy part as a neighbor in a movie. After blowing an audition where she was supposed to exude sexuality, she accepts an invitation to go out on a date with Kevin McCabe (Dermot Mulroney), a TV star. After spending the night with him, Elizabeth asks him to give his honest assessment of all her body parts as she stands naked in front of him. Then, she runs home and spends some quality time with the stray dogs she takes in and lavishes with love.

Co-writer and director Nicole Holofcener does not mercilessly tear down these three idiosyncratic women and their struggle to find a small share of happiness. Instead, she shows us how immensely difficult it is in an appearance-obsessed culture to go against the grain and find beauty within. In addition, the two sisters have to try and overcome the habit energy of their mother who has never been satisfied with herself. By the end of the movie, Michelle and Elizabeth haven't pulled themselves out of their habitual behavior but they have made several valiant efforts to change. We identify with their struggles and wish them well as they keep searching for personal transformation. 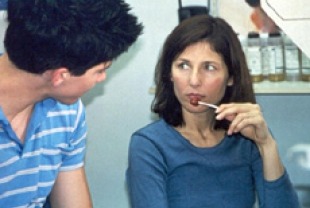