A Song for Martin

Directed by Bille August
An extraordinary Swedish film about a married couple's adventures in love late in life.

"We love," Nikki Giovanni wrote, "because it's the only true adventure." There are very few enthralling dramas that convey this important dimension of two people who become one in marriage. Soulmates are partners who experience bonds that go beyond everyday togetherness to a transcendent purpose, some higher calling that tunes their hearts and minds to a common chord. Once this adventure is begun, there is no going back. Even adversities become opportunities to mine the riches of the relationship. Both of these themes are explored in this remarkable Swedish film directed by Bille August (Smilla's Sense of Snow, Les Miserables).

Martin (Sven Wollter) is a world-class composer and conductor at the peak of his career in his sixties. While rehearsing for a concert, Barbara (Viveka Seldahl), the first violinist, discovers an error in the musical notations he has written. The two of them are sexually attracted to each other even though both are married with grown children. When she announces to her son and daughter that she has fallen in love with Martin and is seeking a divorce from her husband, her son explodes in anger calling her irresponsible and selfish. He can't understand how a woman in her fifties could be caught up in such a late-in-life love.

On their honeymoon in Morocco, Martin and Barbara experience a joy and exhilarating freedom with each other that they've never felt before. They vow always to be honest and open in their communication. At home in a beautiful place by the sea, they begin working together on Martin's music. Fueled by each other's energy, they are able to accomplish much. Until Martin begins forgetting things. They are both shocked when he is diagnosed with Altzheimer's.

Martin disappears into himself as the disease slowly destroys his mind and the remnants of his former life. Barbara becomes his caretaker, and it is a huge task given her husband's deterioration. In one scene, he becomes so disoriented while conducting that he must be removed from the stage. Barbara takes him to Morocco for a second honeymoon but he gets lost in the streets. She realizes that the man she married has vanished into this always depressed and irritable victim of Altzheimer's.

This is the kind of intimate and character-driven film that Bille August does best. The real-life married couple Wollter and Seldahl each won a Swedish equivalent of an Academy Award for their performances in this extraordinary drama. It is refreshing to see a film where elders are treated with so much respect. Although it is very sad to watch Martin succumb to the ravages of Alzheimer's, the adventure of their love is still held high in our hearts right down to the last moments of the drama. 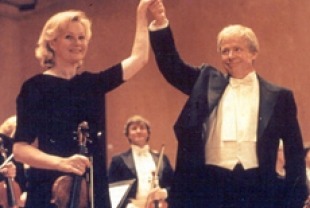