Directed by Sam Mendes
A rigorously structured and exquisitely filmed drama about a father and son connection that is a brief shooting star of love.

Many fathers are aloof and distant from their sons. They may be preoccupied with work or just the kind who is unable or unwilling to open up emotionally. As a result, far too many sons desperately yearn for some kind of connection, any kind of connection with their fathers. The lucky ones share some moments of love, intimacy, and meaning.

Director Sam Mendes' follow-up to his Oscar-winning American Beauty explores this tricky turf in a rigorously structured and exquisitely filmed drama about a father and son connection that takes place over a six-week period in 1931 when Prohibition was in effect. The austere screenplay by David Self is based on a comic book novel written by Max Allan Collins and illustrated by Richard Piers Rayner. Here is a intriguing film that will draw you into a deep pool of feeling about your father, the father within, or your own role as father.

Michael Sullivan (Tom Hanks) is a grim and tight-lipped enforcer for John Rooney (Paul Newman), a powerful Irish mobster in the Midwest. He lives in a fancy house with his wife Annie (Jennifer Jason Leigh) and their two young sons, Michael Jr. (Tyler Hoechlin) and Peter (Liam Aiken). Despite all the outer trappings of success, Sullivan is not a happy man. He knows that this kingdom has been built on blood, violence and murder — a lot of it due to his own hands. He also is uneasy with the realization that he is beholden to Rooney for all that he has.

At a wake for a slain gangster, one of the boys asks Rooney's son Connor (Daniel Craig) why he is always smiling, and the sinister man gives a chilling answer that reveals his nasty character and hatred for humanity. The two youngsters are very curious about what their father really does on all his missions for Rooney. Twelve-year-old Michael decides to hide in the car one evening and see what enfolds. He is shocked and sickened at what he sees: Connor murders an unarmed man and his father machine-guns a few of his armed associates. When Sullivan discovers that his son has witnessed these murders, he knows that nothing will ever be the same again. And he's right.

Connor now sets up Sullivan for a hit and then kills Peter, mistaking him for his brother, and Annie. Rooney, who has treated this family as an extension of his own, is enraged when he finds out what Connor has done. It only reveals the truth of his earlier observation: "Sons are put on earth to trouble their fathers." Sullivan and his son flee town, seeking protection and a job in Chicago with Al Capone's lieutenant Frank Netti (Stanley Tucci). When that plan fails, this clever survivor comes up with a way to bring out Rooney's ire: robbing the banks where the mob has deposited "dirty" money. Meanwhile, Maguire (Jude Law) is hired to assassinate Sullivan. This hit man has the odd penchant for photographing the dead bodies of the people he has killed.

In several interviews about The Road to Perdition, director Sam Mendes has talked about the water motif used throughout the film as a link with death. At the wake, water drips into a bucket near the coffin of the deceased from the ice that has been used as a preservative; several gangsters are shot to death in a downpour of rain; a key character is executed while sitting in a bathtub; and the climax takes place as water laps a shoreline. This use of water as a symbol of life's transience works well.

But the real mutability is conveyed in the magic moments of Michael Jr.'s intimacy with his father. In a crucial scene, a farmer's wife tells Sullivan that his son really dotes on him even though he doesn't see it. It is an epiphany for the hard-boiled enforcer that loosens him up. Later, when Michael Jr. reaches out to his father for a sign that he is loved, he gets what he wants. Father and son have a brief embrace, the only physical closeness they ever share. For this 12 year-old that is enough to last a lifetime. In these primal relationships, the smallest gestures can be cherished forever as sacraments of love.

The DVD includes a selection of deleted scenes, an audio commentary with director Sam Mendes, a Cinemax “Making of . . .” Special, and a photo gallery. 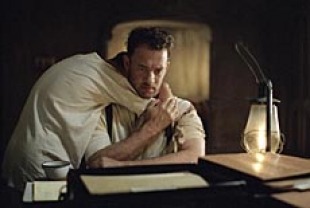