In Philadelphia, a Columbia TriStar Home Video release, Tom Hanks stars as Andrew Beckett, a talented lawyer at the peak of his career. He has just been promoted to senior partner in his firm. Then, suddenly, a glitch in an important case he is handling sends the partners into a panic. They fire him for incompetence. Beckett knows the real reason: they have found out that he has AIDS.

After being rejected by nine other lawyers, Andrew convinces personal injury attorney Joe Miller, played by Denzel Washington, to take his case. He intends to bring a suit against his former firm for wrongful termination. Although these two share a love of the law, they are worlds apart in their lifestyles. Andrew has a longtime lover Miguel. Miller is married and admits a bias against homosexuals. Again and again in the course of the trial, he is forced to square off against his own prejudice.

Jonathan Demme's pathbreaking film about AIDS puts a human face on one of its victims and indelibly carves into our consciousness the personal costs of this disease. Tom Hanks gives a stirring performance as Andrew Beckett, a man whose life force is drained away before our eyes. While many AIDS patients suffer in isolation, this one is fortunate to have the loving support of his family.

Two powerful messages of Philadelphia are that we cannot push death aside and that we can learn from persons with AIDS to live in the moment. The most dramatic scene in the film takes place in Andrew's apartment when he tries to share with Joe his love of opera. Attached to his I.V. bottle, he dances across the room entranced by an aria sung by Maria Callas. Andrew, fully aware that he is dying, has mastered the art of living fully in the ripeness of the moment while Joe, embarrassed by his client's emotional swoon, tries to make a quick retreat.

The film also succeeds in conveying the hornet's nest of ignorance, prejudice, half-truths, and devastating lies connected with AIDS. As Joe comes to see, this scourge extracts a social death that precedes the physical one. In revealing the insidiousness of abuse against persons with AIDS, Denzel Washington's performance is a tour de force. As he gradually changes his attitudes and overcomes his fears, he shows how easy it is for prejudice to taint even the most reasonable persons. Although Joe doesn't completely succeed in eradicating his homophobia, he does deeply respect Andrew's valiant fight for life and his attempt to die with dignity and grace. This is a good first step. Hopefully, Philadelphia will open the door for other filmmakers to cover the continuing drama of AIDS and the public's varying responses to it. 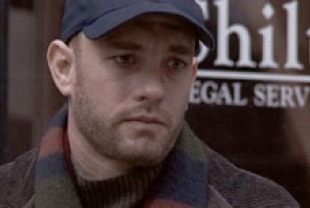 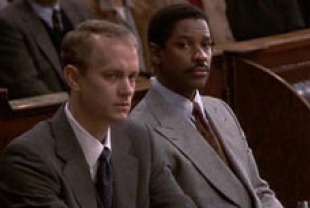