Directed by Terry Gilliam
A weird meditation on time and apocalyptic possibilities.

Cole (Bruce Willis) is a convict in the year 2035 who lives underground along with other survivors of an outbreak of an Ebola-like virus in the year 1996. Scientists send Cole back in time to retrieve information about the virus and its source.

However, he overshoots that targeted year and lands in a psychiatric ward in 1990. There he meets a psychologist (Madeleine Stowe) who takes an interest in his ravings about the future. Cole also is mesmerized by a flipped out patient (Brad Pitt) whose father is a genetic scientist.

Eventually, Cole lands in 1996 and tracks down "l2 Monkeys," a group he believes is the one responsible for the viral outbreak. But there are still several surprises in store for this time traveller.

12 Monkeys presents a weird meditation on time and apocalyptic possibilities. Director Terry Gilliam can always be counted upon for something new and outrageous. 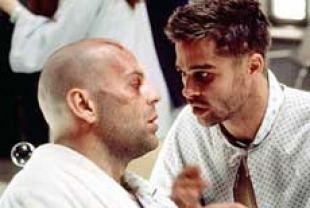