How I Killed My Father

Directed by Anne Fontaine
A compelling French psychological drama examining the encounter of an aloof father and his chilly son after 20 years apart.

In Father to the Man, Christopher Hallowell writes: "Fathers are curious people, aloof and mysterious, popping in and out of our young lives, often having in common a reputation for being distant and preoccupied with their own affairs." It is usually during middle age that sons struggle with the images they have of their fathers. For some, it is a liberating experience to shed illusions and to encounter commonalities. For others, it is just another long, hard stare into the abyss that still separates. The latter is the case in How I Killed My Father, an engrossing French film directed by Anne Fontaine.

Jean-Luc (Charles Berling) is a wealthy Versailles gerontologist who distributes growth hormones to his wealthy patients who want to slow down the deteriorating signs of aging. One day he receives a letter informing him of the death of his father. He recalls the troubled time they spent together.

A flashback reveals how Maurice (Michel Bouquet) suddenly appears at a party for Jean-Luc after a 20-year absence. Inexplicably, this doctor left his family in France to serve the poor in Africa. Now the two men are forced to deal with each other, and it is not easy for either of them.

Jean-Luc cannot understand or forgive Maurice for leaving. He is especially angry that his father seems to evidence no guilt about what he did in the past. Jean-Luc is also troubled by his father's refusal to be impressed with his wealth and success. Maurice, on the other hand, views his son as a cold-hearted, totally self-absorbed person. He wonders why Jean-Luc's good fortune hasn't loosened him up a bit. While he has little to share with his son, the visitor succeeds in charming his wife Isa (Natacha Regnier), a beautiful but lonely woman.

Anne Fontaine directs How I Killed My Father with an intense focus on the psychological fallout from the enmity between father and son. Jean-Luc's brother Patrick (Stephane Guillon), who was just a youngster when Maurice left, tries to cope with his return in some comic monologues at a club where he performs. He serves as a chauffeur for Jean-Luc, and the tension between the two of them mounts following the return of their father. The friction between Jean-Luc and his wife also heightens when she shares with Maurice the fact that her husband declared that she wasn't able to have children early in their marriage. He suggests that she seek a second opinion. Meanwhile Jean-Luc continues his affair with Myriem (Amira Casar), his assistant at the clinic. The startling finale of this close encounter between a father and son who orbit around each other in two very different worlds is quite amazing. 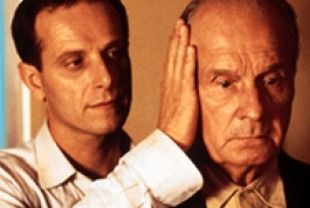