Directed by John Singleton
A little-known episode in America's racial history that destroyed a town and a dream.

Rosewood recounts the events and attitudes which led to a little-known episode in America's racial history.

In 1923 Florida, a small black town was burned to the ground and many of its inhabitants were murdered by whites from the neighboring town of Sumner. In the film, the fire is sparked by a white woman's lie that she had been assaulted by a black stranger assumed to be hiding in Rosewood. Even those who know the truth cannot stop the violent reaction of the Sumner men.

Director John Singleton has helmed a series of films (Boyz N the Hood, Poetic Justice, Higher Learning) which have sought to puncture stereotypes about African-American life while also exposing the wages of racism. This time the people of Rosewood are self-sufficient owners of their own land and businesses, prosperous and dignified in contrast to the poor white trash who attack them. The film is not only a depiction of racial hatred, it is also a portrait of class warfare.

Against this backdrop, three heroes stand out: Sylvester Carrier (Don Cheadle), Rosewood's piano teacher, who with his quiet pride and seeming affluence is an affront to the lynch mob; Mr. Mann (Ving Rhames), a resourceful loner who ends up protecting many of the town's women and children when they flee into the woods; and Mr. Wright (Jon Voight), a white storekeeper in Rosewood who finally decides he cannot stand by and watch his neighbors be killed.

Despite a successful rescue effort at the end, Rosewood remains a tragedy, the story of the destruction of both a town and a dream. The survivors of the massacre finally received reparations for the loss of their property and possessions in 1994. 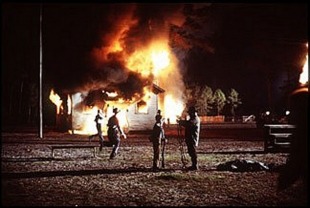