Directed by Rob Reiner
Convincingly plumbs the spiritual impulses behind the yearning for justice.

In the opening scene of Ghosts of Mississippi, racist Byron De La Beckwith (James Woods) on an evening in June of 1963 shoots the civil rights leader Medgar Evers in the back in his Jackson, Mississippi, driveway.

Inspired by the yearning of widow Myrlie Evers (Whoopi Goldberg) for justice, assistant district attorney Bobby DeLaughter (Alec Baldwin) decides to re-open the case 25 years later. The all-white jury had let Beckwith go free despite the overwhelming evidence against him.

DeLaughter's zeal for doing the right thing results in estrangement from his wife and the sinking feeling that he is putting his young children in harm's way.

In the film's most crucial scene, DeLaughter revisits the scene of the crime and with great compassion puts himself in the place of Evers's wife and children as they find him in the driveway dying before their eyes. The point is driven home — fellow feeling is the green growth of life. Rob Reiner's Ghosts of Mississippi convincingly plumbs this spiritual impulse behind the yearning for justice. 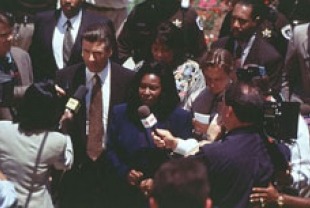