Directed by Denys Arcand
An inventive, witty, and illuminating religious work of art about a contemporary staging of the Passion play, the institutional church's reverence for the status quo, and the false gods of secularism.

Is it possible to mine new meanings from the life and teachings of Jesus of Nazareth? French Canadian writer and director Denys Arcand answers in the affirmative: "Jesus is the one really talking to me in the most urgent manner and his voice is irreplaceable."

Jesus of Montreal won the Grand Prize of the Jury at the 1989 Cannes Film Festival and gained 12 Genies, the Canadian equivalents of the Academy Awards. The drama takes place in modern day Montreal where Father Leclerc (Gilles Pelletier), a priest with an interest in theatre, hires Daniel (Lothaire Bluteau), a talented and intelligent actor, to direct the annual Passion play staged on the grounds of a hillside shrine overlooking the city. Using data from the latest archaeological finds and new translations of the Talmud, he reworks the traditional Stations of the Cross.

Although their performance of Daniel's revised Passion play is a hit with the critics and the public, Father Leclerc is upset by what he regards as its wild speculations and radical portrait of Jesus; he announces that he will have to consult his superiors.

Meanwhile, Daniel has begun to identify with his character. Accompanying Mireille to an audition for a beer commercial, he is enraged when she is humiliated by the producer and director. Taking a cue from Jesus in the Temple, he smashes the television equipment and drives the advertising clients out of the theatre.

In the midst of the next performance of the Passion play, Daniel is arrested by the police on charges of aggravated assault and vandalism. Released from custody after a hearing, Daniel is propositioned by Richard Cardinal (Yves Jacques), a show business lawyer who offers to make him a superstar; through the right career planning, he is assured, all of Montreal could be his.

Father Leclerc now orders the cast to return to the traditional Passion play script. They defy him for one last performance of their version. The police arrive and shut down the drama, despite protests from the audience. A security guard says, "Look, he dies on the cross and is resurrected. No big deal!"

But for screenplay writer and director Denys Arcand, reflecting again and again upon the Jesus story is a worthwhile devotional exercise. Believers will be edified by Arcand's choice of contemporary parallels for, among other events, the beheading of John the Baptist, Jesus' baptism, the calling of the disciples, Jesus' temptations, the chasing of the moneychangers from the Temple, the arrest and trial of Jesus, and his death and its impact on those who followed him.

In one of the crucial scenes in Jesus of Montreal, the battle-weary Father Leclerc tells Daniel that churchgoers don't want to be informed about what his research reveals about Jesus. They come looking for happiness; they hope to be consoled with the good news that "Jesus loves them and awaits them." Turned out by the church, Daniel must find his own understanding of what Jesus means. The path leads to the innards of the city where his life and death give significance to the Scriptural passage "Greater love has no man than he lay down his life for his friends."

Although it is obvious from the story that Arcand has little respect for the institutional church's reverence for the status quo, he is even more critical of the false gods of secularism. The film presents a caustic portrait of the emptiness of conspicuous consumption, celebrityhood, advertising, sexism, the media, and the quest for the grail of power, success, and fame.

Jesus of Montreal is an inventive, witty, and illuminating religious work of art. It is a telling critique of institutionalized Christianity and a savage assault on the hallowed idols of modern western society.

The DVD has biographies of the five main actors and the theatrical trailer. 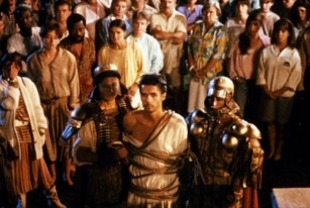