Directed by Robert Redford
A picaresque tale set in a small Hispanic town where a developer's idea of progress threatens to change the community completely.

The necessity to create community and make it work is one of the most powerful, long-lasting, and painful imperatives of American life. The Milagro Beanfield War, directed by Robert Redford and adapted from John Nichols's 1974 novel, treats this theme with humor and humanism. The film is set in a small Hispanic town in northern New Mexico where a developer is building a leisure-time resort replete with condos, tennis courts, and a golf course. When Joe (Chick Vennera), a handyman from Milagro, irrigates his half-acre beanfield with water controlled by the development, he sets in motion a series of events that reveal the underside of the Anglos's vision of progress.

Among the colorful performers in this picaresque tale are Salsa singer Ruben Blades as the sheriff who tries to stem the tide of troubles in the town; Brazil's Sonia Braga as Ruby, the community's passionate political activist; John Heard as a burnt-out 1960s lawyer and publisher of the local newspaper; Daniel Stern as a graduate student from the East who is studying Hispanic culture; Christopher Walken as an undercover agent for the state police; and Carlos Riquelme as the town's indestructible senior citizen. This religious old man and his other worldly companion (Roberto Carricart) serve as catalysts to bring about Hispanic solidarity.

Screenplay writers David Ward and John Nichols have successfully translated the novel's delightful mix of fantasy, folklore, and comedy to the screen. The Milagro Beanfield War celebrates the magical and often surprising ways in which people can come together in community. And politics has little to do with it. 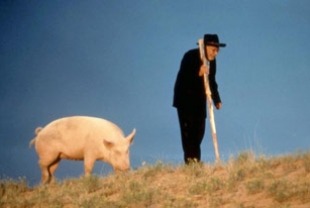