Lee Holloway (Maggie Gyllenhaal) has just been released from a mental institution. Back in suburbia for her sister's wedding, she immediately falls prey to old fears and self-disgust. Her father Burt (Stephen McHattie) is a violent and abusive drunk, and her mother Joan (Lesley Ann Warren) remains an eccentric woman who doesn't know how to let go of Lee. At the wedding party, she bumps into Peter (Jeremy Davies) whom she knew in high school. He's recently had a nervous breakdown and wants to get together with her. All of this pressure is too much for Lee. She retreats to her room and prepares to mutilate herself. Instead, she goes to the kitchen and presses a hot tea kettle against her thigh.

Convinced that she'll go bonkers if she stays home all the time, Lee applies for a job as a secretary. Mr. Grey (James Spader), a lawyer, is impressed that she won an award for being the best typist in her class. He is a meticulous fellow who tells Lee that the job will be very boring. That doesn't bother her, she says. The questions he asks seem very weird but she soldiers on cheerfully and is hired. The routine at the office appeals to Lee and she does very well with the simple tasks she's given.

Mr. Grey doesn't miss a thing that goes on, and most of his observations have to do with her. He's bothered by typos which he circles with a red marker. Then there's the problem of her weak voice on the telephone. He hates her habit of twisting her hair, sniffling, and moving her tongue around the edges of her mouth when she's nervous. Lee diligently tries to make herself more efficient and less bothersome. Meanwhile, she remains very curious about her boss's private life especially after a beautiful, very angry blonde appears in the office and sends him scurrying for cover in the closet. The raging woman stomps on his raincoat and storms out ordering him to sign the separation papers.

This strangely compelling and brilliantly acted psychological drama is directed by Steven Shainberg. Erin Cressida Wilson has written a richly nuanced screenplay based on a story by Mary Gaitskill. The two performances by Maggie Gyllenhaal and James Spader are fascinating to watch as they explore the inner and outer reaches of a sado-masochistic relationship.

The lawyer and his secretary do a little dance around each other until he discovers her secret of self-mutilation. He orders her to stop and has other things in mind which he demonstrates one day when he asks her to bend over his desk and read a letter she's just revised while he forcefully spanks her. Although Mr. Grey is clearly turned on by this activity, Lee is the one who sees it as the answer to her dream of ever finding a soul-mate. An evening with Peter definitively proves that he will never be able to satisfy her, but pressure to marry him builds after Mr. Grey fires her. She is shattered and doesn't know where to turn or what to do until she comes up with a crazy scheme to prove the depth of her love for her former boss. 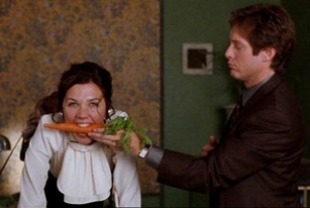