Directed by Paul Greengrass
A documentary-like account of the cold-blooded murder by English soldiers of thirteen unarmed and peaceful demonstrators in a nonviolent march in Derry, Ireland in 1972.

"It may be that the most radical thing we can do right now is to act from our vision, not our fear, and to believe in the possibility of its realization. Every force around us is pushing us to close down, insulate, retreat. Instead, we need to advance, but in a different way. We're called to take a leap into the unknown," Starhawk has written about the contemporary global justice movement. The same words could have been spoken by civil rights leader Ivan Cooper (James Nesbitt) in 1972 as he prepares for a peaceful march in protest against the internment without trial of Irish Catholics by Protestant authorities. The citizens of Derry are ready to stand up for a just cause and make their will known.

Meanwhile, the commander of the British ground forces in Northern Ireland, Major General Robert Ford (Tim Pigott-Smith) and Brigadier Patrick MacLellan (Nicholas Farrell) are making plans to "teach these people a lesson" by maintaining law and order. They plan to round up the hooligans who have been involved in other protests and to win the propaganda war.

Written and directed by Paul Greengrass, this tension-filled drama unfolds with all the power and punch of a documentary. At the outset, we sense the difficult challenge facing Cooper, an avid believer in the nonviolent philosophy of Mahatma Gandhi and Dr. Martin Luther King, Jr. He tries to make sure that the angry youth in the community don't send the march careening into a violent confrontation with the British soldiers. He meets with members of the IRA and begs them not to spoil the demonstration. But Cooper's worst fears are realized when poor Irish youth start throwing rocks at the troops, and the British respond with live ammunition, cutting down 27 people and leaving 13 dead.

Co-winner of the 2002 Berlin Film Festival's Golden Bear, Bloody Sunday makes it clear that from the start the British were going to use all possible force to maintain order. The actual scenes of the shootings are difficult to watch, and all of our empathy goes to the unarmed marchers. In a heart-rending speech after the massacre, Cooper compares the tragedy to the slaughters at Sharpesville and Amritzar. He laments the day as one marking the destruction of the civil rights movement in Ireland and the biggest victory yet for the IRA. Endnotes reveal that no British military personnel were convicted of wrong-doing and that two of the major players were eventually honored by the Queen of England. The credits roll with the song "Sunday Bloody Sunday" by U2 playing in the background.

The DVD features one audio commentary by screenplay writer/director Paul Greengrass and star James Nesbitt, and another by Don Mullen, author of the book that inspired the film, Eyewitness: Bloody Sunday; cast and crew interviews; a conversation between James Nesbitt and civil rights leader Ivan Cooper, whom he portrays in the film; and some location footage. 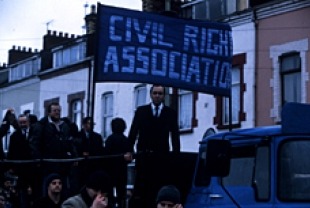