Directed by Abderrahmane Sissako
A spellbinding African film about the modern condition of rootlessness, a state experienced by millions around the globe.

A million people are crossing borders in our world every day. The number of refugees in Central Europe, for example, is greater than the populations of Vienna and Berlin. In The Global Soul, Pico Iyer writes: "More and more of us may find ourselves in the emotional or metaphysical equivalent of that state we know from railway stations, when we're sitting in a carriage waiting to pull out and can't tell, often, whether we're moving forwards, or the train next to ours is pulling back." It is a strange feeling to be in transit or displaced, and this condition is now more widespread than ever. Never before have so many men, women, and children felt surrounded by so much they cannot understand.

African writer and director Abderrahmane Sissako (Life on Earth) has captured this feeling of rootlessness in the visually lyrical Waiting For Happiness. Seventeen-year-old Abdallah (Mohamed Mahmoud Ould Mohamed) has been away from his hometown of Nouadhibou on the West African coast for so long that he doesn't even remember the local dialect. He is visiting his mother before heading off to Europe. There is very little that he can do or say in the state of transit in which he finds himself.

Khatra (Khatra Ould Abdel Kader), a young orphan who is the apprentice to an elderly handyman (Maata Ould Mohamed Abeid), tries to help the stranger refine his verbal skills. The boy, who wants to be an electrician when he grows up, is filled with energy and is most curious about death. A gifted singer and musician is passing on her knowledge to a talented young girl who practices every day with her. A lonely Oriental immigrant taps into the roots of home by singing a song in a karaoke bar. And a young woman (Nana Diakite) shares with Abdullah the sad story of her daughter's death and her husband's rejection of her when she went to be with him in Europe.

Simone Weil, the religious writer, has observed: "To be rooted is perhaps the most important and least recognized need of the human soul." We feel in our bones Abdallah's loneliness and isolation. In one of the most melancholy scenes in the film, he has a hard time negotiating a steep hill in the desert on the way to the train. The passage to a new life is never easy; there is always a test or a struggle that must be endured. Equally adrift in the end is Khatra, the young orphan, who makes his way to the train with hopes of getting on board as a stowaway. He is kicked off, and when we last see him, he's just a speck in the desert landscape. Waiting For Happiness is one of those unusual movies that imprints itself in your consciousness and just won't let go days after you've seen it. 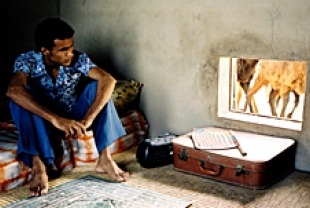