Directed by Otari Iosseliani
A light-hearted French drama by a Russian born director about a chemical factory worker who escapes to Venice for a playful respite from his boring and repetitive life.

Vincent (Jacques Bidou) resides in a small French village with his wife (Anne Kravz-Tarnavsky), his mother, and two young sons. No one in the family pays much attention to him while he tries to unclog the gutter on the roof or when he asks his offspring what they are up to while puttering around in the garage. He might as well be the invisible man.

At the chemical factory where he works, the routine is even more disconcerting. Vincent isn't allowed to smoke and this drives him crazy. The only thing in his life that gives him pleasure is his painting which he does in the little spare time he can find. One day, Vincent decides he has had enough. He walks off his job, smokes a cigarette on a hill overlooking the town, and decides to escape to Venice for a break.

Although his wife is upset by her husband's disappearing act, no one else seems to miss him very much. His eldest son has a crush on a girl, and they are interested in making a glider to fly over their village. The boy is also doing a painting of St. George slaying a dragon on a wall in the local church. The priest there uses a telescope to spy on women in the community getting undressed in their rooms. The postman unseals letters and reads them with glee. And when money is in short supply, Vincent's mother digs up a vase in the yard filled with coins.

The Georgian-born writer and director Otar Iosseliani has a fascination with the little details of people's lives and the way they cope with the surprises, disappointments, and pleasures that come their way. Vincent has a lark in Venice. His father supplies him with the money he needs and tells him to look up a distant relative who proves to be a rather disagreeable fellow posing as a rich and refined gentleman of the arts. The elaborate charade he puts on for Vincent's benefit falls flat when he is stingy with the whiskey he offers his guest.

A much better time is had with a friend (Arrigo Mozzo) who takes him around the city. It turns out they share a love of cigarettes and liquor. They also have a mutual moment of elation on the top of a building overlooking the harbor of Venice. His buddy salutes what he calls the spirit of the city that is not immediately comprehended by tourists. Vincent finds some time to sketch and paint even though a pickpocket steals some of his money. When he returns home, his angry wife accepts him with open arms and soon he drifts back into the monotony of his everyday life. We all need a little playful respite from the grind. It can refresh our spirits and send us back into the fray with a renewed ability to cope. 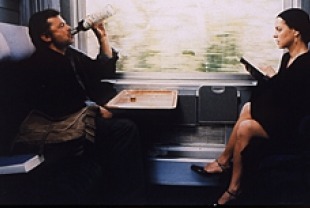