Directed by Julie Taymor
Vividly conveys the passion, creativity, and fearlessness of one of Mexico's most colorful and controversial artists.

Frida Kahlo (1907 - 1954) was a brief shooting star in the firmament of Mexican art whose most ardent qualities were fearlessness, passion, and inventiveness. Co-producer and star Salma Hayek devoted seven years to bringing the story of this colorful and controversial artist to the screen. She found a soulful ally in director Julie Taymor (Titus) who matches Frida's daring on canvas with her own daring images on the screen. The end result of this collaboration is a captivating drama that will speak to the nonconformist in us all.

In the opening scene, Frida (Salma Hayek) is a student at a Mexico City high school where the great painter Diego Rivera (Alfred Molina) is putting the finishing touches on a mural in the auditorium. She and her friends watch him seduce his model until his jealous wife, Lupe Marin (Valeria Golino), appears and verbally attacks him for his selfish philandering.

Frida's carefree life is shattered when she is seriously injured in a bus crash that leaves her with a broken spinal column, collarbone, ribs, pelvis, and eleven fractures in her right leg. Confined to a bed and abandoned by her boyfriend who goes overseas to study, she begins to draw and to paint. Some of her early work are unusual self-portraits revealing the grotesque damage done to her body and spirit. Thanks to an indomitable will, Frida regains her ability to walk but for the rest of her life she will be subjected to searing pain, numerous operations, and extended hospital stays. In order to numb the pain, the artist turns to alcohol and drugs.

Frida goes to visit Rivera to get his honest response to her art. He is impressed with what he sees and takes her into his inner circle of bohemian friends including photographer Tina Modotti (Ashley Judd) and painter David Alfaro Siqueiros (Antonio Banderas). Frida dresses up like a man for a family photograph at her sister's wedding and one evening does a sexy tango with Tina to demonstrate to those present her bisexual proclivities. Knowing that Rivera is an unrepentant philanderer, she goes ahead and becomes his third wife with the understanding that she'll overlook his love affairs as long as he remains loyal to her. Frida's prudish Catholic mother is appalled at the marriage between this elephant of a man and her daughter, a dove. It doesn't take Rivera long to return to his old habits of adultery. His new wife is most hurt by his seduction of her sister (Mia Maestro).

In his book Creativity in Self-Actualizing People, Abraham Maslow writes: "It seemed to me that much boiled down to the relative absence of fear. They seemed to be less afraid of what other people would say or demand or laugh at. . . . Perhaps more important, was their lack of fear of their insides, of their impulses, emotions, thoughts." Frida certainly fits these description. She was not afraid of strong feelings. This robust film salutes her fearlessness as she forges her own identity, spits in the face of tradition, and stands by Rivera, who repeatedly disappoints her with his addiction to sex. Nonetheless, they remain friends during their many years together.

Frida's fearlessness also carries her through a nightmarish sojourn in New York City where her husband loses a battle with his patron Nelson Rockefeller (Edward Norton) over the content of a mural in Rockefeller Center, a miscarriage, a brief fling with the aging Leon Trotsky (Geoffrey Rush) during his stay in Mexico, and a brief imprisonment following his assassination. Salma Hayek was born to play this character, and she plays it full tilt. Director Julie Taymor pulls out all the stops with the surreal and smashing finale that includes the artist's triumphal entry in a bed to the one and only Mexican art exhibit of her paintings.

The two-disc special edition DVD contains a 35-minute interview with the star and champion of the film, Salma Hayek; audio commentaries by director Julie Taymor and composer Elliott Goldenthal; four featurettes focusing on different aspects of the production; plus plenty of behind-the-scenes footage. Also included are an American Film Institute Q&A session with Julie Taymor and an interview with her conducted by Bill Moyers. 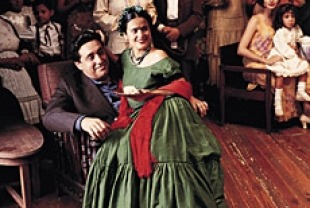 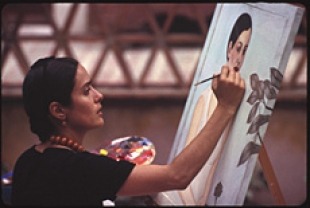