Directed by Todd Haynes
A remarkably alluring film about one suburban woman's yearning in the face of a discovery that shatters her cheery and tranquil suburban life.

"All human eyes have longing in them. People of all races, children, the old, mothers, women in love, police officers, workers, adventurers, murderers, revolutionaries, dictators, and saints all have the same light of longing, the same deep fire, the same infinite desire for happiness and joy without end. Human eyes are like wells, like the well of the Samaritan woman. Every woman is a woman at the well," Ernesto Cardenal has poetically observed. Writer and director Todd Haynes (Safe) has made an alluring and evocative film about this human yearning that fuels our dreams and churns beneath our daily rituals. He calls Far From Heaven a tribute to the kind of 1950s melodramas made popular by Douglas Sirk (Imitation of Life, All That Heaven Allows).

The drama is set in 1957 in Hartford, Connecticut, and portrays the upheavals that take place in the cheery and seemingly tranquil suburban life of Cathy Whitaker (Julianne Moore). All that transpires in this remarkable film leads to a poignant and powerful closing scene where all the longing in her eyes floods into our consciousness, leaving us breathless. In that moment, she is every woman at the well.

Cathy is the picture perfect wife of Frank (Dennis Quaid), her successful husband who heads the local branch of Magnatech TV sales company. They have two children, a maid, and a cheery circle of friends who relish parties at their suburban home. When Frank gets drunk and she has to pick him up at the police station, Cathy takes it all in stride. When her female friends gather for cocktails and gossip about the sexual drives of their husbands, Cathy does not volunteer that she and Frank sleep in separate bedrooms. But when she decides to surprise Frank at the office with a dinner one night, this gracious wife is stunned to find him kissing another man. Determined to keep the family together no matter what, Frank agrees to start seeing a psychotherapist twice a week.

With her husband still not sharing anything with her, Cathy finds a surprising ally in Raymond (Dennis Haysbert), a black gardener who is raising his teenage daughter by himself since the death of his wife. He is a sensitive man who loves nature, modern art, and even can talk gracefully about spirituality. One day Raymond consoles Cathy after finding her crying in the garden. When he takes her out for a ride and then for dinner at a black restaurant, a local gossip from suburbia sees them together and spreads the word. Raymond's daughter is attacked by some white boys, and then stones are thrown through the windows of their house by blacks. The gardener realizes he has crossed the line and will never be able to keep his business going.

Far From Heaven convincingly portrays the shadow side of the Eisenhower years in America when conformity was the order of the day and anyone who strayed from the restrictive norms of the community had to pay a high price. Of course, racial tensions and divisive attitudes toward homosexuality are still with us today, not to mention the continuing shafting of women who try to act upon their deepest yearnings. By the time, this drama winds its way to the crucial last scene, you will empathize with Cathy and see in her eyes the light of all human longing.

The DVD features an audio commentary with director Todd Haynes, “Making of...” and “Anatomy of a Scene” segments, plus a featurette on the “Filmmaker’s Experience” in Q&A format. 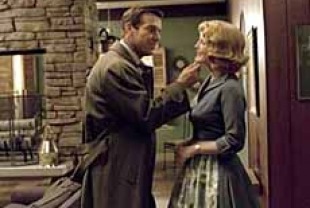 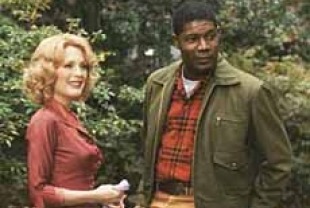